Cup of hotdog water? Check. Cruel jibes to aim at actors who are wearing their clothes all wrong? Check. Here's how to watch the Oscars, according to Patrick Freyne. Video: Kathleen Harris 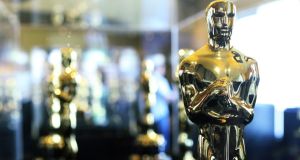 Tomm Moore, who is in Los Angeles for this weekend’s Oscar ceremony, said his greatest ambition for his nominated film The Song of the Sea is that Irish people will go and see it. Photograph: Ian West/PA Wire

Oscar-nominated director Tomm Moore has said Irish people have a “post-colonial” attitude to going to the cinema to see Irish films.

Moore, who is in Los Angeles for this weekend’s Oscar ceremony, said his greatest ambition for his nominated film The Song of the Sea is that Irish people will go and see it.

He maintained Irish people do not embrace Irish films until those films do well abroad first, with Once being a case in point.

Releasing The Secret of Kells first in Ireland was “naïve”, he said. The film, released in 2009, did indifferent business in Ireland until it received an Oscar nomination and rave reviews abroad.

The Song of the Sea is created by Cartoon Saloon in Kilkenny with Moore as director. The story, based on the ancient Celtic myth of the selkie, half seal, half human, concerns two children, Ben and Saoirse, who live in a lighthouse by the sea with their father, Conor, who remains distraught over the loss of his wife several years earlier.

It stars the voices of David Rawle and Brendan Gleeson. Though How To Train Your Dragon 2 remains the overwhelming favourite to win in the best animated film category, Moore is hopeful the nomination will give the film traction at the box office.

“I think we have a shot (of winning),” said Moore. “The problem is there are still voters you have to reach. Studios like Dreamworks are spending a million trying to get the win (for How To Train Your Dragon 2).

“I want to get enough steam behind it (The Song of the Sea) here in America and in France that when we release it in Ireland in July there will be an audience interested in seeing what the fuss is all about it,” he said.

“We really feel we need the credentials. We hope the next time that we will not have to play that sort of game, but it will take a while for Irish people to trust as a brand that is worth spending some money on.”

Moore said Irish people are embarrassed if they go to an Irish film and it is bad. It puts them off going to another one, but the same attitude does not extend to Hollywood films. Irish people will continue to attend Hollywood films even if the last one they saw was bad.

Moore said many in the Irish film industry had discussed director John Michael McDonagh’s contention that Irish films were bad “a lot” and conceded that there was an image problem to be addressed.

“He’s (McDonagh’s) not saying it without motivation. There is a perception, and none of us among Irish filmmakers like to admit it, that the Irish public doesn’t trust Irish films.

“I don’t think it is that Irish films are bad. There’s something at play where Irish people are doubtful if it is not from a big studio. There’s an embarrassment factor (over Irish films). If a Hollywood film is crap, you’ll just laugh it off.”

Moore said there was a “new pride” among the younger generation of Irish people that was not around when he was a child. “I’m hoping there is more pride in being Irish. That’s what we are doing with our story; reflecting Ireland in an authentic way, but also in way that shows people how beautiful it can be - all the folk tales and the environment.”

An entourage of some 20 people from Cartoon Saloon have flown out from Ireland to Los Angeles for the Oscars. Among those attending the Oscar service will be 14-year-old Leitrim actor David Rawle who will be there with his parents.

Cartoon Saloon is hosting an event for cast, crew and families of those involved in the film at the Set Theatre in Kilkenny on Sunday night starting at 10pm.