Older than Ireland review: the secrets of our centenarians 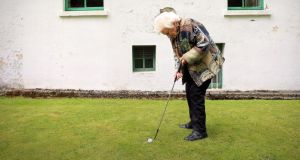 When Eason began to stock Happy 100th Birthday cards, it became clear that centenarians were no longer the outlying rarities they had once been. Indeed, they are in danger of becoming a “demographic”.

Nonetheless, Alex Fegan, director of popular documentary The Irish Pub, did not face an enormous pool of potential interviewees when preparing his film on Ireland’s oldest residents.

10 Nanny state? After the mess here in Texas, I’d give my right arm to live in one

11 Moses Farrow: ‘I felt inherently like I was a bad kid. The abuse at home reinforced that’

12 Barry Gibb: ‘My brothers had to deal with their demons, but my wife wasn’t going to have it’

17 Covid-19 vaccines: What’s going on and why are targets being missed?

19 Gabriel Byrne on Weinstein: ‘He was a violent bully. He had such power’

20 Long Covid in children: New data is cause for concern, scientists say

22 Frost dispenses with the manual of diplomacy for NI protocol

26 Loyalists and the Irish Sea border: ‘From what I’ve seen it’s all hyped up’

29 Sort It: Antique sales on the rise as buyers seek out sustainable items

35 If people feel suicidal, fight their toxic belief that the world would be better without them

37 Vaccination passports: What are the pros and cons? And will we have to use them?