Okja is a South Korean-American action-adventure film directed by Bong Joon-ho and co-written by Bong and Jon Ronson. The film has an ensemble cast headed by South Korean child actress Ahn Seo-hyun, with Tilda Swinton, Paul Dano and Jake Gyllenhaal. 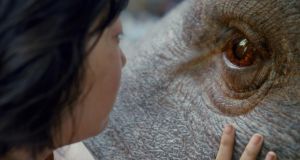 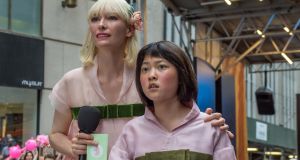 After all the fuss surrounding the means of exhibition, we are happy to report that the first Netflix film to screen at Cannes is worth seeing on any available medium. It took a while before we got the chance to make that judgement. The expected booing of the Netflix logo at the press screening led on to grumbles about the film being projected in the wrong ratio.

Once Bong Joon-ho’s Okja got going again, we were treated to a characteristically eccentric entertainment from this extraordinary Korean director. There are a few bum notes. But that’s what happens when you swing for the stands. An everyday story of giant pigs, rapacious corporations and animal liberation movements, Okja smoothly folds the apocalyptic in with the comic and the sentimental. You don’t see this madness every day.

We begin with Tilda Swinton – star of Bong’s Snowpiercer – as Lucy Mirando, sinister head of the multinational conglomerate that bears her surname. We’re sure no comparisons are being made with controversial agrochemical giant Monsanto. (Honest, m’lud.) Anyway, Mirando has developed a species of giant pig and scattered individual examples throughout the world.

In Korea, spirited young Mija (Ahn Seo-hyun) takes care of the one she has named Okja. George Orwell told us pigs are clever and this is cleverer than most. When Mija slips down a crevice, Okja – a loveable lump of CG flesh – finds a cunning way of rescuing her.

But the idyll is coming to an end. The men from Mirando, accompanied by Jake Gyllenhaal’s brash TV naturalist, arrive to reclaim their prize and transport her to New York for a publicity bash. Meanwhile, a multinational band of animal rights activists – Lily Collins and Paul Dano among their number – are plotting to liberate Okja.

The film’s environmental politics are not particularly nuanced. Co-written by the director and Jon Ronson, the script is here to tell us that genetic modification is dangerous, large corporations are rapacious and the production of meat is a cruel business. Those broad arguments are, however, made with such vigour and invention that it is hard to resist.

Swinton has magnificent fun as the evil Lucy and her even less forgiving sister. That actress’s capacity for heightened reality fits very neatly with the Bong aesthetic. Few movements take place without a surge on the soundtrack and a flourish of the camera. Darius Khondji, the great cinematographer, makes the countryside lush and the city hard and primary coloured.

There are suggestions of Bong’s great monster movie The Host, but, if anything, Okja is brasher, madder and less connected to everyday reality. To paraphrase Woodrow Wilson on something very different, it’s like writing ecological propaganda by the light from fireworks.

We can even excuse a second action sequence in the past 12 months to John Denver’s Annie’s Song. The one here is infinitely more imaginative – and textually consistent -- than that in Free Fire. Elsewhere the jaunty, culturally diverse original score urges the action along with enthusiasm.

About Jake Gyllenhaal’s awful, high-pitched nails-on-a-blackboard turn we will say no more than he manages the feat of not giving the oddest performance in a film that also stars Shirley Henderson. No matter. The film around him is a mad pleasure. You can watch it on Netflix soon. Irish readers will, however, almost certainly not see it in their local cinema. Which seems a shame.