Pablo Larraín’s take on Pablo Neruda’s life mixes the real and the surreal, but unfortunately loses touch with its characters 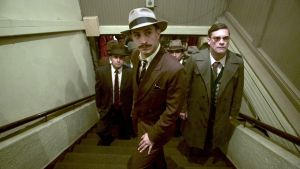 There is more talking in Pablo Larraín’s beautiful, frustrating new film than there was in the same director’s Jackie, but somehow Neruda doesn’t get nearly so close to its subject. Obviously, Mrs Kennedy was already a very public figure. There were fewer gaps to fill in.

But there’s something else. Larraín comes at Pablo Neruda from an oblique angle. The film is as much about the Chilean poet as it is about an imagined police officer tasked with tracking down the communist bon viveur before he flees the country. It is a film of doubles.

The dreamy Gael García Bernal, who plays officer Oscar Peluchonneau, could hardly look less like Luis Gnecco, who gives us a round and middle-aged Neruda, if the two characters were of different species. Both are, however, tied to quests. Both seek to honour versions of Chile. Both believe in their own purity.

The picture begins, as it means to go on, with a scene that winds hints of surrealism in with real life. We are in a parliamentary lavatory so lavish one half wonders if urinals have been placed about a Regency drawing room.

Neruda, at that point a senator, is on the point of falling out with president Gabriel González Videla. Following his inevitable denunciation, Neruda manages to go underground in the most public of fashions. Everywhere he goes, he leaves traces for Peluchonneau to find.

The film does, however, ultimately threaten disappearance up its own unstressed dactyl. Larraín is so concerned with making allegorical poetry that he loses touch with his characters and his obscurely purposed narrative.

It’s almost there. But not quite. Not quite.