Jia Zhangke is one of the world’s top filmmakers and this is his most audacious work yet, but this mountain is not as solid as it first seems 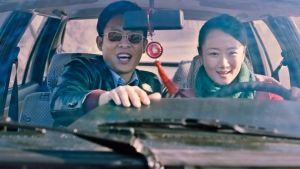 ‘There’s bravado to admire about this loose triptych. But this strange film with strange textures falls apart during the feeble final act’

Writer-director Jia Zhangke emerged from China’s underground cinema to become one of the most prominent filmmakers from the “sixth generation”. Since winning the Golden Lion at Venice in 2006 with Still Life, he has gained considerable international standing: to date, five of his films have been selected for competition at Cannes and the American critic John Powers has called him: “the most important filmmaker working in the world today”.

Mountains May Depart is his eighth and arguably most audacious work to date, with a timeframe that runs from the late 20th century to 2025, a shifting aspect ratio and a cross-continental span. The film opens with a blaze of reds as lanterns swing and dragons parade to celebrate the incoming New Year. It’s 1999 and the countdown to Chinese reunification has begun. Three friends – the carefree coquettish Tao (Jia’s wife and longtime collaborator Zhao Tao); her coalmining boyfriend Liang (Liang Jingdong); and the boastful budding capitalist Jingsheng (Zhang Yi) – mark the occasion with fireworks, the first of many explosions that punctuate the film.

Determined to steal Tao away from Liang, the self-regarding Jingsheng buys the coalmine where Liang works and dazzles the girl with material possessions. Things do not go well. We jump toward the present and a brief reunion between Tao and the son Jingsheng insisted upon calling Dollar. The boy is currently living with his father and stepmother in Shanghai and has nothing in common with Tao, who has remained in her rural hometown of Fenyang (in China’s Shanxi province). A second chronological shift brings us to 2025 and Dollar’s life as a college dropout in Australia.

There’s bravado to admire about this loose triptych. There are, too, some very affecting moments. But this strange film with strange textures – even at the level of the shot – falls apart during the comparatively feeble final act. The dialogue sounds strained, the Freudian subtext is trumpeted too fiercely, and socio-economic and cultural shifts are repeatedly noted in casual conversation and incidental music: Go West, anyone?

Against this, the director’s canny use of image repetition creates a pleasing rhythm and Zhao Tao should perhaps save space in her suitcase for the Best Actress award.

Gillette ad: Why it's good for men and women that we're having this conversation
9