Money Monster review: not so much a hot tip, more a solid investment

There?s nothing wildly original about Jodie Foster's latest, but strong turns from the bankable leads make it worth a punt 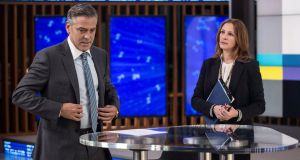 Following its recent premiere at the Cannes Film Festival, more than a few critics suggested that Jodie Foster’s snappy, unpretentious thriller seemed to have crawled unaltered from the 1990s. There’s something in that. The picture has a flat, unseasoned look to it that suggests Clintonian sophistry and the first Britney Spears LP.

The hostage-taker-as-celebrity conceit points back further to films such as Dog Day Afternoon and The King of Comedy. So, there’s nothing hugely original about Money Monster. It is, however, encouraging to experience a film that tells its story with such admirable economy. Films featuring stars this huge rarely wind down with so little fuss.

1 ‘Summer is not lost’ - Taoiseach announces accelerated easing of coronavirus restrictions
2 Fatal police shooting in Kentucky cuts to heart of community divisions
3 Coronavirus: People to be allowed to travel anywhere in their county from Monday
4 California police fatally shoot 22-year-old man on knees with hands up
5 Donald Trump is in trouble, and that could spell very bad news
6 Dublin city playgrounds to remain shut despite Taoiseach’s announcement
7 Tyrone midwife on the cover of Vogue magazine
8 Trump under fire from US military after troops threat
9 Pubs reopening will not mean ‘fellas having a few pints and peanuts’, Holohan warns
10 Unlocking Ireland: What exactly will happen in reconfigured phase two on Monday?
11 Trump’s claim it was a ‘great day’ for George Floyd is criticised
12 Covid-19 restrictions: What you still can’t do this weekend
13 ‘White Irish people have never had to think about this’
14 Temperature checks for visitors after nursing homes reopen from June 15th
15 Passengers face queuing in car parks at Dublin Airport
16 Major credit union plans to limit savings accounts to €40,000
17 NCH Livestream Series: Watch Bell X1 frontman Paul Noonan perform solo
18 ‘Get the eff out of this country’: Irish racism, as heard on Liveline
19 O’Doherty and Waters ordered to pay legal costs of case against State over Covid-19 laws
20 Stephen Collins: FG and FF seem oblivious to the daily SF assault they suffer on social media
21 Covid-19: What we can expect when shops reopen next week
22 CofI bishop challenges English counterpart over Irish headstone epitath
23 Irish fears for Brexit talks if Hogan gets top WTO job
24 Meghan Markle makes impassioned and moving plea on George Floyd killing
25 The Gaeltacht was basically a sex camp established by Éamon de Valera
26 Pets are getting confused by the working from home new normal
27 Covid-19: Wage subsidy and unemployment payment extended to end of summer
28 Ikea among major retailers to reopen next week
29 Irish in New York: City ‘looks and sounds like a war zone’
30 Iran records surge in Covid-19, raising fears of a second wave
31 Cate Blanchett has chainsaw accident at manor-house home during lockdown
32 Remote working: Ending the lunacy of pointless commutes
33 August the right time for primary schools to reopen
34 Love/Hate is returning to RTÉ on Friday nights. Why did we love it so much?
35 EU accuses Britain of backtracking as Brexit deadline nears
36 Student accommodation sector set for harsh Covid-19 lesson
37 Robbie Lawlor ‘met by a gunman’ when he attended Belfast appointment
38 Liverpool could seal title win at Anfield when they host Crystal Palace
39 GAA club matches to return on July 31st with intercounty games in October
40 Coronavirus: UK death toll is now above 40,000
Real news has value SUBSCRIBE