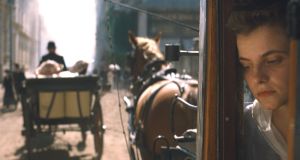 The last time I saw László Nemes in the flesh he was holding an Academy Award. The Hungarian film-maker had just received the best foreign film Oscar for Son of Saul (2015) and was addressing members of the press in the building next to the auditorium. Staring up his nostrils from the front row, I felt he looked impressively unshaken.

“When you are inside it seems so unreal,” he says. “It seems like a dream and also very real. It’s a mixture of those. The fact that the film was talking about our darkest hour was important. I had to grow up and talk about it. That gave me the strength to carry on.”

Telling the tale of a Sonderkommando attempting to bury his own murdered child amid the horror of Auschwitz, Nemes’s debut feature always felt like a likely winner of that statuette. A sensation at Cannes, it had generated unusual degrees of emotion in subsequent screenings. Nemes, closing in on 40, became a major auteur almost overnight.

Did they recognise his success at home?

“In a way, yes,” he says. “That surprised people. Maybe it is a little change of paradigm. Because Hungarians like to complain. We in central Europe have a bleak perception of reality.”

A lean man with impeccable English, Nemes offers a crooked smile that does nothing to dispel the stereotype he’s constructing.

“Stereotypes have a certain truth,” he shrugs.

Everyone was eager to see what he would do next. The answer was a real, full-on puzzler. Premiering at the Venice Film Festival last September, Sunset follows a young woman who, after failing to secure a job as a milliner, wanders curiously about Budapest in the year before the outbreak of the first World War. It’s a delicious notion. The collapse of the Austro-Hungarian Empire remains a fascinating subject. The tensions in those years have triggered endless masterpieces in verse and fiction.

“There is no prerequisite to read anything before watching the film,” he says with a smile. “Some Americans think you have to read something to get it. But Joseph Roth’s Radetzky March did have an impact and also Kafka. Particularly Kafka. I think those times were so important in shaping the birth of the 20th century. You have Austria-Hungary, which is made up of all these cultures and languages. You have all these breakthroughs in science and culture being born. Out of this cauldron, instead of building something we got this suicide of Europe.”

All this is the stuff of great drama. But not every critic has fallen for Sunset. There are stylistic similarities to Son of Saul. Once again the camera follows a lone figure through chaos, but the narrative thread was – despite panicked activity just outside the frame – reasonably lucid in Son of Saul. Sunset thrives on confusion. Characters wander in with no explanation. Locations are sometimes obscure. The dialogue is particularly confusing. Delivered in a low burble it appears to come from all directions. I’m betting that the story makes more sense with English-language subtitles – at least we can hear what’s being said – than in the original Hungarian, but it’s still not always clear whose words are being translated.

“There is overlapping dialogue coming from everywhere,” he agrees. “For a Hungarian it might be different. With the subtitles we are choosing the piece of information to highlight. But I don’t think we are manipulating too much. There are levels in the dialogue.”

Nemes goes on to expound upon the virtues of ambiguity. He doesn’t like films to lay our their stories too explicitly. He likes the viewer to be forced into making his own contribution to the telling.

“Less and less we are open to questioning how cinema is structured,” he says. “It’s the dictatorship of plot. There are other ways and the history of cinema shows that. In our human experience we don’t have access to all the information. Cinema, TV and the internet give the illusion we have all the information. The camera tells the story in a god-like way.”

The clatter of voices in Sunset suggests a modernist mode that was just working its way into literature. There’s something of TS Eliot about these warring perspectives competing for attention.

“Yeah, yeah. He is one of my favourite poets,” Nemes says. “He takes in so many influence and asks how close we are in this civilised world to destruction. And he said that when you read a poem you don’t have to understand it first time.”

Nemes has taken a circuitous route to his current prominence. Born in Budapest, he moved with his family to Paris just as the Berlin Wall was coming down and his home country was shaking itself into a new shape. He was the sort of kid who enjoyed shooting horror films in the basement and, after studying politics, found a job working as assistant to the legendary Hungarian film-maker Béla Tarr. With his long takes and gloomy, elliptical plotting, Tarr is by some measure the most influential figure in recent Hungarian cinema.

“From him I acquired ambition to make films that are not like others,” he says. “I got the intensity of teamwork and how to make complicated shots. How you embrace the audience in the time and space of your character. Again there is something in the Hungarian tradition about subjectivity.”

After that experience he spent time studying at New York University. It feels a little as if he approached his education backwards. He had formative working experiences and then went back to college. Maybe that’s what we all should do.

“It’s better if you have some thoughts about the world before you come to answer questions about the world,” he said. “I went to NYU after I’d made a short film. I said that what was most important in my education was that I’d seen a master at work. I said that. There’s that tradition in painting: you are in a workshop first.”

Nemes feels like the real deal. He spent decades honing his craft and then won all the plaudits and all the awards with his first feature. He could have taken the safe route to middle-brow prestige projects, but he chose to make a bloody awkward film instead. Sunset is the sort of film that will annoy some. It’s the sort of film that will attract dedicated followers. The depiction of a vanished Budapest on the edge of transformation is alone worth the price of admission.

“Look at the photographs of Budapest at the beginning of the century and you can’t reconcile it with the city now,” he sighs. “There was so much optimism. One of the first underground systems – which is beautiful. If you look at it now you see only the ruins of that.”

He looks properly sad about it all. What was that he was saying earlier about central European mindset.

Sunset is released on Friday, May 31st

Bridge on the River Kwai: ‘This film does not authentically portray the conduct of British officers’
10