Review: The true story of the 1970 Miss World contest is mortifying viewing 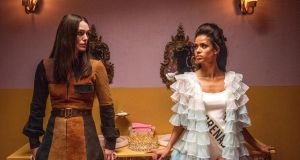 A crowd-pleasing dramatisation of the Women’s Liberation Movement’s entertaining disruption of the 1970 Miss World contest, Misbehaviour pitches a mismatched group of fed-up women against Bob Hope (Greg Kinnear), the BBC, and Eric Morley (Rhys Ifans, having a ball) who founded the tacky British-based meat market alongside his wife Julia (Keeley Hawes). It’s just a great story, you wonder why nobody thought to make a movie before.

Sally Alexander (Keira Knightley) is a history student who, at home, is scolded by her mum for not being womanly enough and at university is scolded for her “bit niche” proposed dissertation on women’s role in the labour movement. Jessie Buckley is Jo Robinson, a thrilling, leafleting powerhouse. While Jo and Sally scheme with other feminist activists, across town there are suspect dealings at the Commonwealth Club, as Grenada’s prime minister Eric Gairy is recruited on to the judging panel.

1 Kanye West says he will run for US president in 2020
2 Fontaines DC: ‘We’ve no licence to speak for Ireland’
3 Irish family stuck in Cyprus: ‘We hope our flights home are cancelled’
4 If you are young and live outside Dublin you could be in trouble
5 If hairdressers ran our schools every child would be going back in September
6 I think my boyfriend broke up with me because I was diagnosed with herpes. I’m devastated
7 Vacation once again: A night at a campsite, a five-star hotel and a full-Irish B&B
8 World View: Ireland weaponised by London in Brexit talks
9 Bobby Storey: The IRA's planner and enforcer who stayed in the shadows
10 Trump vows to ‘safeguard’ America’s values and defeat 'radical left, anarchists, agitators, looters'
11 Covid-19: Travel restrictions to stay and 'green list' put on hold amid fears of second wave
12 Fintan O’Toole: Future of the American republic is in grave danger unless Trump is defeated
13 Ireland’s weather: Warning of disruption as wind alert issued for 19 counties
14 Ruth Negga: ‘People who say they don’t consider skin colour... are you f**king blind?’
15 Patrick Freyne: You endearingly sentimental sociopath, I’ve just the show for you!
16 How much do Irish people earn? And what will Covid-19 do to our wages?
17 Rare whale dies after getting into distress in Wicklow Harbour
18 ‘Where are you really from?’: Growing up black in Ireland
19 ‘Only a civil servant’ could have come up with ‘unenforceable’ pub regulations
20 Satay noodles: An antidote to bland pasta salads
21 Coronavirus claims one more life while 11 new cases reported in Republic
22 In Irish orphanages, being ‘coloured’ was a defect. I wish Mam had lived to see Black Lives Matter
23 Taoiseach ‘disappointed’ he only learned of Barry Cowen’s driving ban on Friday
24 How I learned to ignore the ‘straight bully’ in my head and become a ‘bad lesbian’
25 Pierce Brosnan: ‘I was an only child from a fractured family’
26 Haigh. I’m a black woman, and I happen to speak Irish
27 Q&A: How close are we to having a Covid-19 vaccine?
28 Is Donald Trump losing his touch?
29 I live in direct provision. It’s a devastating system – and it has thrown away millions
30 Faces of the future: Some of the rising stars of Ireland’s black community
31 ‘That’ll teach him to challenge the Rossmeister to a mickey-swinging contest’
32 Miriam Lord’s Week: Martin sparks Olympian levels of whingeing in Fianna Fáil
33 Gardaí seek help in finding missing Roscommon toddler
34 Storey funeral a reminder that IRA army council runs Sinn Féin
35 Cocooning Dublin residents celebrate independence on Fourth of July
36 Breda O’Brien: How many other Baby Christophers are there?
37 Inspiring style: reboot your home with these fresh interiors ideas
38 Arson attack at home in Dundalk leaves five in hospital
39 David McWilliams: Governments can't 'create' jobs, so why do they keep pontificating about it?
40 Five things to know about Ireland’s new political landscape
Real news has value SUBSCRIBE