Review: Nick Broomfield strikes a balance in his documentary on the singer and his muse 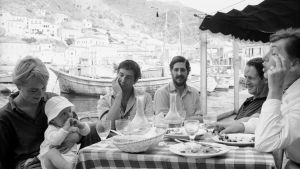 Marianne Ihlen (left) with her son, and Leonard Cohen (third from left)

Who would be a muse? That’s the question underpinning Nick Broomfield’s romantic, angry, funny, sorrowful new film. Marianne & Leonard: Words of Love, a documentary portrait of the poet-singer and the woman who inspired many of his earliest hits, including Bird on the Wire and So Long, Marianne.

In 1960, a struggling Leonard Cohen relocated to the Greek island of Hydra, a haven for artists, the plant-waterers and cat-minders of artists, and free love. There, he met

Marianne Ihlen, the ex-wife of novelist Axel Jensen and the mother of a young son (also named Axel), who became his lover, the maker of his sandwiches, and the stunning blonde who sat at his feet while he banged out an incomprehensible novel (Beautiful Losers) and dropped acid.

Between visits from Cohen, Marianne became lovers with a young Nick Broomfield, who is both a supporting character in this sad story as well as the narrator. He is present when little Axel is dropped off at boarding school, one of many abandoned Hydra children that would eventually grow into damaged adults. Never mind Quentin Tarantino’s incoming Manson family film: this is the summer’s curdled counterculture movie to beat.

Ilhen may have inspired beautiful words, but that, alas, is all they were. Supporting musicians recall an endless parade of groupies; friends recount a drug habit so pronounced it earned Cohen the nickname Captain Mandrax (after the branded sedative).

Even without Cohen’s apparently bottomless capacity for womanising and LSD, his love affair with Ilhen was surely as doomed as the swinging social experiment happening around them. As Aviva Layton, the second wife of the Canadian poet and Cohen chum Irving Layton, tartly observes: “Poets do not make great husbands.” Nor indeed was Cohen always considerate of his collaborators, including Hallelujah producer John Lissauer who cheerfully notes that he never got paid for Cohen’s most-covered song.

Broomfield maintains a delicate balance throughout. It’s a tribute to his skill that critics have pulled this way and that on the film’s depiction of Cohen. For some reviewers, Marianne and Leonard is hagiography; for others, it’s a hatchet job. Neither of these polarities pertains. Broomfield is cautious about presenting Axel Jr’s story, a narrative thread that could have been presented with far more damning emphasis. Broomfield is careful to contextualise Cohen’s carelessness and Ihlen’s passivity within the contemporaneous social and cultural climate. Ilhen may get top billing here, but she has little to say of herself beyond radiating in the glow of others. And that’s ultimately a greater tragedy than the star-crossed love of the title.