Lucy review: The Church of ScarJo will be with you soon 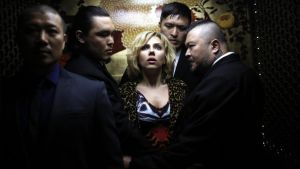 The destroyer of worlds: Scarlett Johansson in Lucy

The odd, ill-considered sponsorship deal aside, Scarlett Johansson has been doing very well for herself lately. Her and Under the Skin are among the year’s best films. Her contribution to the Avengers series has helped that extended franchise conquer the universe. She is a phenomenon of nature. She embodies the spirit of the age. She has become Shiva. She is the destroyer of worlds. She is the one true God.

If you feel we’re going a little overboard here then you may wish to steer a path around the maddest, most entertaining film yet from French vulgarian Luc Besson. Lest we miss the implications, towards the close of Lucy, Johansson is asked – in direct imitation of Michelangelo’s Creation – to extend index finger towards a compliant Neanderthal. There are no spoilers here. This breathlessly paced film sets its ordinary heroine on the path to apotheosis in the opening 15 minutes. The Church of ScarJo will be with you soon.

Like most religious enterprises, Lucy has scant regard for the rigours of science. Indeed, the central premise of the film – and its advertising campaign, for that matter – hangs around one of the great pseudo-scientific myths of our age. Whatever the poster or that man in the pub may have told you, we use a great deal more than 10 per cent of our brains. Never mind. We have been asked to believe greater absurdities by genuine masterpieces, and, once that lie is swallowed, the rest of the hokum slips down smoothly enough.

Johansson plays a slightly muddled-headed young woman adrift in Taiwan. During the opening scenes, her dissolute boyfriend presses her into carrying a mysterious package to a meeting with untrustworthy gangsters. Well, as you will have guessed, it all goes catastrophically wrong. Lucy is forced to become a drug mule and, after the bag of blue crystals ruptures in her stomach, she finds her brain surging with hitherto underexploited energies. She can remember everything from birth. Analytical powers are so heightened that, never having driven before, she is now able to propel a vehicle about busy streets as if playing a videogame for toddlers.

Meanwhile, in Paris, wise old Morgan Freeman is lecturing a class on what our brains might accomplish if used to their fullest potential. At just 50 per cent of capacity might we be able to move matter and read minds? (Well, obviously not, but let’s just stay with it. Okay?) Young Lucy is only at 15 per cent. Omnipotence awaits.

Not quite hitting 90 minutes, Lucy plays as if savagely cut. No proper explanation is offered as to how, in the opening acts, she ends up being kicked into her ruptured, mind-altered state. This is not meant as complaint. It is better to have the film move at a proper pace than allow it to be bogged down in tedious exposition. That noted, we could, perhaps, have done with a little more of Lucy as ruthless killing machine and a little less of her as cosmos-spanning annihilator.

Of course, it is those later sequences that set the film apart from similar stories such as Daniel Keyes’s Flowers for Algernon (filmed as Charly) and Alan Glynn’s The Dark Fields (filmed as Limitless). Lucy is a stupendously effective exercise in high-end misdirection. Thanks to a steely performance from Johansson, galloping editing from Besson himself and lush cinematography from Thierry Arbogast, it proves possible to disregard the idiocy and make oneself believe serious ideas have been incorporated into the mayhem. This is not the case. The picture is almost as lacking in profundity as was the last waffle from Terrence Malick. It is, however, a great deal more diverting.