Review: A feral boy lives with hounds in this exploration of betrayal and isolation 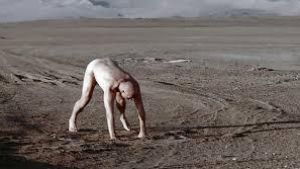 Film Title: Lek and the Dogs

A naked man scrambles across grey, barren expanse on all fours, an indelible murky opening gambit for an unforgettable film. British film-maker Andrew Kötting is best known for the psychogeography of Gallivant and Swandown. Lek and the Dogs completes his Earthworks trilogy, but is more daring than either of the previous instalments, This Filthy Earth and Ivul.

This new freely associative feature adapts Hattie Naylor’s Ivan and the Dogs, a stage play inspired by the true story of Ivan Mishukov, a boy who spent two years living with dogs on the Moscow streets until he was captured by the police in 1998 and eventually adopted.

Lek and the Dogs trailer

There’s a touch of Krapp’s Last Tape in Kötting’s presentation of the adult Lek (French performance artist and Kötting regular Xavier Tchili) who looks back upon his feral life, using a cassette recorder on which his younger self (voiced by Clay Barnard) talks about his traumatic youth. Lek grew up with a violent, abusive stepfather, an alcoholic mother and a sense of “betrayal, abandonment and isolation” that led him to reject humanity to live with a pack of wild dogs. “They disappeared into the ground,” he says. “I followed them.”

Lek’s sad biography is the heart of this experimental film that marries grainy archival footage, odd shots of insects, miners, discarded shoes and a desert cemetery, and musings from Alan Moore, who is credited here as “wizard and eternalist”. The bleak post-apocalyptic landscape and the use of a fictional eastern European “grammelot” with English subtitles evoke Tarkovsky’s Stalker. It’s not pretty, but once your eyes adjust to darkness, it’s frighteningly immersive.

Experimental film can be a euphemism for half-baked, but there’s unorthodox and compelling architecture at play here. The film is divided into philosophically themed, mysteriously titled chapters: “Truth Is Asleep”, “The Trauma of Betrayal”, “The Mind in a Cave”, “The Nature of Eternity”, “The Ancient Customs”, and “A Natural History of Destruction”. Every splice is a rich seam of ideas. Weird and wonderful.