It was a record breaking night for 'La La Land' at the Golden Globes as it won seven awards, beating the previous record of six shared by 'One Flew Over the Cuckoo's Nest' and Midnight Express. Video: Reuters 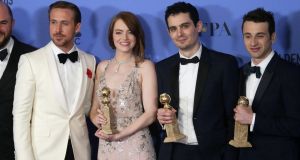 Damien Chazelle’s romantic musical La La Land pushed all competitors into the dust at the Golden Globes awards in Los Angeles on Sunday night. Sadly, none of the many Irish nominees took home a prize.

To nobody’s great surprise, the spectre of Donald Trump’s presidency hung over the event.

Winning seven statuettes, La La Land broke the record for most Globes for a single film. It triumphed in every category for which it was nominated, including best film (musical or comedy), best director and best screenplay. The film’s two stars, Ryan Gosling and Emma Stone, won, respectively, best actor and actress in the comedy or musical category.

The Globes’ record in predicting Academy Awards is sometimes overstated, but La La Land’s odds, already unwelcomingly short, will only narrow further before the Oscar nominations on January 24th. Gosling’s speech, in which he paid tribute to his wife Eva Mendes, was particularly well received. He said: “While I was singing and dancing and playing piano and having one of the best experiences I’ve ever had on a film, my lady was raising our daughter, pregnant with our second, and trying to help her brother fight his battle with cancer.”

There were some surprises in the film section. To this point, Mahershala Ali, who plays a kindly drug dealer in Barry Jenkins’s ecstatically reviewed Moonlight, had been winning most of the precursory awards for best supporting actor. When, in the first major announcement of the evening, Aaron Taylor Johnson took that prize for Nocturnal Animals, pundits wondered if the often-erratic Globes were headed for another journey into eccentricity.

There was one more stunner. To the delight of many, Isabelle Huppert, the veteran French performer, won best actress in a drama for Paul Verhoeven’s controversial shocker Elle. 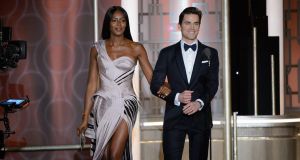 “Oh my God, my heart is beating,” Huppert shuddered. A heavily pregnant Natalie Portman, fancied for her role as Jacqueline Kennedy in Jackie, managed to look sportingly stoic. The Irish-Ethiopian actor Ruth Negga, shiny in Louis Vuitton, was a loser in that category for Jeff Nichols’s historical drama Loving.

With La La Land’s unprecedented sweep, few other films got a look in. Moonlight, the tale of an African-American growing up gay in Miami, won best drama film.

Casey Affleck won best actor for playing a bereaved caretaker in Kenneth Lonergan’s Manchester by the Sea. Viola Davis, massive Oscar favourite, was cheered as she took best supporting actress for Denzel Washington’s adaptation of the August Wilson play Fences. Ms Davis played moving tribute to her father. “He had a fifth-grade education and didn’t know how to read until he was 15,” she said. “But you know what? He had a story and it deserved to be told - and August Wilson told it.”

As expected, the liberal attendees made mention of the US president-elect. Jimmy Fallon, the smarmy host, who drew criticism for ruffling Trump’s hair on his chat show, seemed visibly embarrassed at having to stammer through a few blunt barbs. In comparison to previous Globes MCs such as Ricky Gervais and the partnership between Tina Fey and Amy Poehler, Fallon seemed insipid, grovelling and toothless.

It was left to the likes of Hugh Laurie and Meryl Streep to put the knife in. Winning in the TV section for the spy drama The Night Manager, Laurie adopted a mock sombreness as he said: “I won at the last ever Golden Globes.”

Ms Streep referenced Mr Trump’s impersonation of the disabled New York Times reporter Serge Kovaleski. “This instinct to humiliate, when it’s modelled by someone in the public platform by someone powerful, it filters down into everyone’s life because it kind of gives permission for other people to do the same thing,” she said. The Globes ceremony, which proceeds to the ambient clinking of glasses, noticeably quietened for Streep’s powerful speech. There will be more of this at the Oscars.

Though Colin Farrell, nominated for The Lobster, and Caitriona Balfe, up for TV series Outlander, failed to win, this year’s Globes continued to fly the flag for Irish film. John Carney’s Sing Street, mentioned for best comedy, stands a chance of a best song nomination at the Oscars, Negga still seems likely to get a best actor nomination.

Presented by the Hollywood Foreign Press Association, a slightly mysterious band of fewer than 100 journalists, the Globes traditionally raises the curtain on the last act of Awards Season. Is La La Land now certain to win best picture? Not necessarily. The two previous record holders, both with six wins, were One Flew Over the Cuckoo’s Nest and Midnight Express. The former triumphed. Midnight Express lost to The Deer Hunter. Moonlight and Manchester by the Sea are still in with a shout.