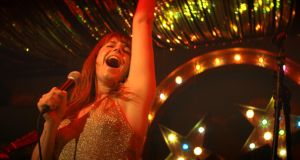 The good folk at Virgin Media Dublin International Film Festival beat the weather this year. But it could hardly have been a more closely run thing.

As the members of Dublin Film Critics’ Circle gathered for their annual awards ceremony, the snow was beginning to fall outside the Light House cinema. The blizzards that caused so many cancellations last year had, however, been narrowly evaded.

Weather and car problems did delay Dianne Lucille Campbell, winner of the Michael Dwyer Discovery award, from arriving until after the ceremony was over, but she struggled onwards to grasp her prize as the tables were being tidied.

Named for The Irish Times’s late film correspondent, the prize acknowledged the Ulster multitasker – who records as Die Hexen – for her work on the stunning monochrome short El Hor.

She also scored Helen Warner’s equally excellent Stigma and will soon be everywhere.

Further honouring our Renaissance people, the critics’ circle, whose president is Tara Brady of this newspaper, passed the George Byrne Maverick award to the indomitable Hugh O’Conor.

Once a child star, then a busy adult actor, and recently a director, O’Conor presented an exhibition of his beautiful portraits at the festival under the title Celebrating Irish Talent.

Jessie Buckley, who won best actress for her storming role as a Scottish country singer in the gobsmacking Wild Rose – the festival’s closing film – was on hand to contribute Hollywood glamour.

The awards help us decode another busy and diverse festival. It was a strong year for Irish documentaries. Kim Longinotto’s Shooting the Mafia offered an engrossing study of the Italian photographer Letizia Battaglia and (indirectly) her subjects within the Mafia.

Paul Duane’s fine What Time Is Death?, shot over several years, returned to the KLF – the musicians and art pioneers Bill Drummond and Jimmy Cauty – as they plotted to build a pyramid from bricks, each impregnated with the ashes of dead volunteers.

Johnny Gogan’s fascinating documentary on Arthur Rudolph, a German scientist who assisted with the US space programme, was a little let down by re-creations that cast familiar Irish actors as American characters.

Going among the extended Flynn clan, the picture, which he directed with Maedhbh McMahon and Lotta Petronella, stood as a raw indictment of how, by institutionalising supposed outsiders from a young age, church and State stripped the guts from entire families.

The best Irish documentary – indeed, the best documentary from anywhere, according to the critics’ circle jury – was surely Garry Keane and Andrew McConnell’s Gaza. Already a hit at Sundance, the film offered a balanced and economic study of that troubled region.

The unspoken intention is to press home the contrast between everyday normality – waterskiing men, a young woman playing the cello – and the continuing tensions that result from the area’s virtual besiegement.

The film allows a fisherman to explain how gunboats dump sewage on those skirting the 5km limit, but it also permits others to shake heads at the intransigence of Hamas. An education and an inspiration.

There were fewer breakouts from the Irish drama selection than we might have hoped. John Butler’s delightful Papi Chulo, which opened the event, and Neil Jordan’s rip-roaring Greta – featuring Isabelle Huppert in volcanic form – have already been discussed in these pages following their premieres at Toronto.

Greta, developed in Dublin by the producer James Flynn, took best Irish film from the critics’ circle. Chloë Grace Moretz is a hip New York student harassed by Huppert’s insistent French maniac. The film is not subtle, but it’s a hoot from unsettling beginning to disordered end.

Mary McGuckian’s ambitious A Girl from Mogadishu gave audiences the opportunity to again marvel at the national treasure who is Ifrah Ahmed. Born in Somalia, now an Irish citizen, she has, over the last years, emerged as a tireless campaigner against female genital mutilation.

Unfortunately the film, starring the American actor Aja Naomi King in the title role, was too messy and unfocused to do full justice to its extraordinary subject.

Ian Fitzgibbon’s Dark Lies the Island was more successful, but it still failed to balance the sum of its parts. The picture makes an effort to knit together stories by the gifted Irish writer Kevin Barry.

Pat Shortt is reliably strong as Daddy Mannion, the ruling force in a rural town whose aberrations would unnerve even Patrick McCabe. Moe Dunford is a less bright member of the same family. Charlie Murphy is Daddy’s younger wife.

Peter Coonan lurks madly in a remote caravan. Shot in attractive, bold shades by the ubiquitous Cathal Watters, the film is rich with fine moments and sharp dialogue, but the cross-cutting stories don’t quite form a cohesive whole.

Alexandra McGuinness, whose feature Lotus Eaters sparked some interest at the beginning of the decade, made a belated return with the bewildering, occasionally diverting She’s Missing.

Kicking up some reminders of Wim Wenders’s Paris, Texas and of Andrea Arnold’s American Honey, the film marks an unmistakable attempt by an outsider to get in touch with this thing called “America”. Lucy Fry plays Heidi, a young woman tramping the desert in a search for her best friend.

Along the way she meets oddballs, encounters violence and stands beside an apparent tribute, in the form of a billboard, to the late English academic Lorna Sage. The picture ends well, but there is too much fruitless meandering on the way to that destination.

The word “international” is right there in the festival’s name, and there was a cornucopia of delights to savour from the word’s imagined corners. The critics’ circle voted Christian Petzold’s Transit best film.

Following up formally curious projects such as Phoenix and Yella, the German director took the odd step of shooting a Holocaust drama in a version of the present day. Based on a novel by Anna Seghers, the picture concerns a young man who moves from Nazi imprisonment to Paris and then on to Marseilles. Various confusions offer him an unlikely chance of escape.

The choice to set the film in the present day could have come across as gimmicky, but, by stripping away the distancing effect of period film-making, Petzold makes the danger seem more immediate.

That film should be with Irish viewers in a month or so. Also coming our way soon – although not soon enough – is Bo Burnham’s Eighth Grade. A hit at the 2018 Sundance awards and a recent winner at the Writers Guild of America, Burnham’s film was released in the United States back in July.

Eighth Grade is an extraordinarily sensitive study of a teenager buffeted left and right by social media, striving schoolmates and a dad who really is trying his best. Burnham deliberately keeps the threat level low as he coaxes a nuanced performance from a newcomer, Elsie Fisher.

Few recent films have connected so firmly with the tortures of being young. With Greta Gerwig’s Lady Bird, it forms satisfactory bookends for the high-school experience.

For this writer, the most arresting new feature at Dublin International Film Festival 2019 was, however, Alex Ross Perry’s Her Smell. (The horrible title is surely intended.) Elisabeth Moss plays a boozed-up rock star and mother – echoes of Courtney Love are unmistakable – who decays and recovers over five acts of fraught discord. It’s not just the structure that suggests Shakespeare.

Moss delivers her dialogue in a declamatory style that seems addressed not just to the other characters but also to groundlings somewhere beyond the screen. It’s a stunning performance in a sprawling film that has already annoyed as many people as it has delighted.

Still without a distributor in these territories. Make a noise.