Jaws: One of the most gripping films out of Hollywood

Review: Steven Spielberg’s 1976 classic is back for a limited release of a shiny new print 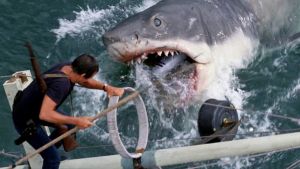 Just this week, something called Avengers: Endgame became the latest of just 11 titles to be named the highest-grossing film ever. Back in 1976, Steven Spielberg’s Jaws – getting a limited release in a shiny new print – became the fifth film to achieve that feat and, if the Cassandras are to believed, dragged the industry away from its post-classical innovations and towards its ongoing addiction to empty calories.

There is some truth in this. Universal spent more on television advertising than had been flung at any previous film. The unprecedented nationwide release gestured towards an end to slow build through word of mouth. And it became the first film to earn $100 million in the US (its overall $470.7 million would be respectable for a blockbuster today). Get out of here, Robert Altman.

None of which distracts from the indisputable fact that Jaws is among the most gripping entertainments Hollywood ever dreamt up. We think of it as the beginning of High Early Spielbergia and, yes, there is a lot here that remained characteristic of his style. He is already good with children. The domestic action takes place behind actual white picket fences. But he never again demonstrated – and rarely attempted – such a gift for sustained tension. Those silly people who call Jaws a horror film should be flung in the street with their baggage, but it certainly functions like an exercise in violent macabre.

The mechanical shark is so appalling that one is minded to question Spielberg’s claim that it would have appeared more frequently had it worked better, but, in recent years, with nothing left to prove, he has often repeated that story. Whatever the cause, the picture works magnificently when the shark is looming and less well when it shows its teeth. John Williams’s borderline avant-garde score is – let’s not pussyfoot – a serious contender for the best ever in a Hollywood production. Roy Scheider, Robert Shaw and Richard Dreyfuss trade men-at-work dialogue that would have pleased Howard Hawks.

Film historians will forever debate whether or not Jaws’ success – to use the language of 1066 and All That – was a Good Thing, but the film itself remains as essential an American pleasure as Little Women, hamburgers or Miles Davis (to name three very different things).

Dr James Barry: the Irishwoman who fooled the British Empire
10