Amy Berg film on Janis Joplin tells the story of a raw, explosive talent that couldn’t escape her ultimately fatal addiction to heroin 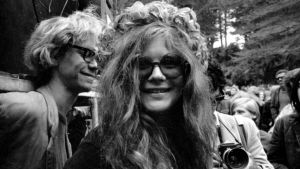 Amy Berg, director of the brilliant Deliver Us From Evil and the equally troubling West of Memphis, will know that her documentary on Janis Joplin cannot avoid comparison with Asif Kapadia’s recent Amy.

She has dredged up some electrifying footage of Joplin passionately chewing her way through cosmic blues. It avoids sensationalism and cheap pathos. But the film lacks the fluid style of Kapdia’s piece. Little Girl Blue feels like essential viewing for already-committed Joplinistas. Those yet to get on board the Festival Express may be less convinced.

Berg is not in the business of turning Joplin into a victim. Nonetheless, there are sharp lessons here about the pressures society places on American women to conform to certain physical norms. Growing up in Texas, she seems to have been painfully aware that she didn’t look like the girls in the movies.

We know now that San Francisco in the 1960s destroyed as many young people as it liberated, but the film suggests that Joplin really did find a kind of release there.

As her raw, but explosively melodic work with Big Brother and the Holding Company gains attention, the singer fails to escape an ultimately fatal addiction to heroin.

Dick Cavett turns up to ineffectively parry rumours of a (somewhat unlikely) romantic relationship and attest to her unstoppable zest. Kris Kristofferson and surviving bits of The Grateful Dead emerge from the Old Testament to spread bearded wisdom.

The live footage reveals an unequalled blues-powered energy: Joplin climbs inside standard belters and hollows them out from the inside. But the film reminds us that – fine as the Holding Company’s Cheap Thrills sounds – she was still searching for original material worthy of her cyclonic skills. What might she have accomplished?