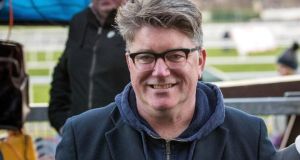 Patt Shortt: “I think the film board are brilliant. I did two films with them last year and I hope to do three this year.” Photograph: ©INPHO/Ryan Byrne

The Irish Film Board has reiterated calls for increased State funding, warning that investment is needed to develop the film industry.

Speaking at the launch of the IFB’s production slate for 2017, board chair Annie Doona noted that its grant increased in the last budget, to a total of €15.5 million for this year.

“We are thankful and grateful for that increase,” Dr Doona said. “However, we still feel that in order to grow, sustain and develop the Irish film industry, we do need to urge for the restoration of funding to at least pre-recession levels of €20 million.”

James Hickey, the IFB’s chief executive, said 2016 was an extraordinarily successful year for Irish cinema, with Oscar nominations for Room and Brooklyn. During the summer, films such as A Date for Mad Mary and The Young Offenders performed spectacularly at the domestic box office.

“International box office for Irish films over the last two years has been staggering: $170 million [€159 million],” he said. “That represents about 20 million people buying tickets to see films funded by the Irish Film Board. That reflects very strong international support.”

Shortt in the belly

Actor Pat Shortt was among the panel assembled to discuss those films going into production this year. Shortt will next appear in Morgan Bushe’s drama The Belly of the Whale, which is supported by the IFB.

“I think the film board are brilliant,” he laughed. “I did two films with them last year and I hope to do three this year.”

In addition, playwright Mark O’Rowe discussed his much anticipated feature debut, The Delinquent Season, which stars Cillian Murphy, Andrew Scott and Eva Birthistle in the tale of two disintegrating relationships. The film’s producer, Alan Maloney and Ruth Coady, both of whom were at the launch, are also working on Mary Shelley, a biopic of the Frankenstein author starring Elle Fanning.

Upcoming animation from the IFB includes Nora Twomey’s The Breadwinner. Created by Cartoon Saloon, creators of Song of the Sea, The Breadwinner is being produced by Angelina Jolie. New features from Rebecca Daly, Aoife McArdle and Aisling Walsh are also on the way.