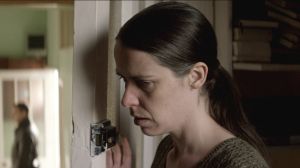 Caoilfhionn Dunne in In View

I’m pretty certain there is a gloomy joke – or, at least, a sombre allusion – at the opening of the third act to Ciarán Creagh’s brave first feature. A young woman wheels a stroller and a bag of children’s clothes to a charity shop.

“Brand new. Never used,” she tells the assistant. Creagh is surely inclining towards that old saw about the shortest novel ever written: “For sale: baby shoes, never worn.”

There is dark humour throughout In View, but this remains a grim film that offers the audience little respite from its engagement with grief and remorse. Caoilfhionn Dunne is terrific as Ruth, a Dublin Guard who is failing to process two interlocked tragedies. We first meet her telling blue jokes at the pub. She evades censure after being stopped by friendly colleagues on the way home.

We later learn that Ruth, ill-tempered and uninterested, is forbidden from working outside the station. Lord help anyone unwise enough to seek verification of their passport application. Relations with her late husband’s mother are poisonous. Her father-in-law is more forgiving.

There is a Beckettian flavour to some of the more absurd moments. Any number of Sam’s heroes would enjoy Ruth trying on a coffin for size. Such asides only serve, however, to further darken the already sepulchral mood. The implication is that existence is so appalling the only sane response is resigned laughter.

What really kicks In View into life is Dunne’s committed performance. Her long face carved by furrows, the actor keeps just enough hidden to encourage interest in her character’s unhappy journey. The end is, perhaps, a little melodramatic. But nobody could argue it betrays what has gone before.