In Fabric: A spooky anthology of fabulous frock-shocks 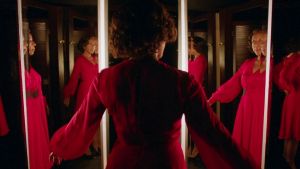 There comes a moment in the fourth feature from Duke of Burgundy and Berberian Sound Studio auteur Peter Strickland when the haunted (possibly murderous) dress alluded to in the title hovers above a potential (possibly dreaming) victim before swooping in and smothering them with folds of red silk.

The scene approximates the sensation of watching In Fabric, with its relentless assault of reds and period ugliness. If you ever doubted that the 1970s was the most hideous decade in history, the film’s montage of lurid interiors and DOP Ari Wegner’s unflattering shots of dental work will soon persuade you otherwise. Several of the planet’s most glamorous women – including Gwendoline Christie and Sidse Babett Knudsen – look monstrous. Picture Tales of the Unexpected born of creative differences between Lucio Fulci and Tony Warren.

There are hints of the occult about Dentley & Soper, the department store at the centre of this unnerving portmanteau, with its hypnotic TV advertisements and in its witchy, imposing staff, including Strickland regular Fatma Mohamed: “And may I interest you in other desired supposes in our exclusive boutique?” she purrs in an accent that falls somewhere between the Eastern Bloc and Venus.

So it comes to pass that hard-working, newly divorced Sheila (Marianne Jean-Baptiste) acquires a cursed frock ahead of a series of dates, while her grown son (Jaygann Ayeh) cavorts with his disdainful, older girlfriend (Gwendoline Christie). Everything in Sheila’s existence, from the mystical corporate philosophy poster hanging behind her passive-aggressive managers at work (Steve Oram and Julian Barratt) to the welts that appear on her skin after wearing the diabolical dress, is sinister and disconcerting, a feeling that escalates as the curse comes to pass.

A second, less convincing story sees unfortunate washing machine repairman Reg (Leo Bill) stuck with the dress as a prank at his bachelor party, before passing it on to his fiancee Babs (Hayley Squires).

Anthology films typically feature three stories, leaving In Fabric with either too few or too many. In common with The Duke of Burgundy, the film is styled after the vibrant giallo films of the 1970s, notably the work of Dario Argento and Mario Bava. Unlike Strickland’s previous work, however, it always feels like homage rather than art in its own right. A fabulous, spooky thing just the same.