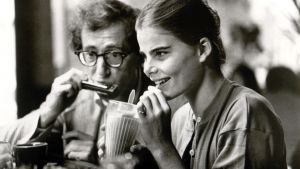 Woody Allen and Mariel Hemingway in Manhattan. This fitfully amusing comedy is now majorly compromised by its May-December romancing

Here be skylines. Manhattan, Woody Allen’s unabashed love-letter to New York is painstakingly composed of postcard images: boating in Central Park, strolling past the fountains at West 50th Street and 6th Avenue, and, most famously, the iconic shot of the Queensboro Bridge at dawn (for which – trivia klaxon – the production brought their own bench).

The film frequently, which has recently been digitally restored, appears on American Film Institute lists and has a spot at the National Registry; yet, upon completion, Allen asked United Artists not to release it and offered to make another film for free.

His response was not entirely unreasonable. Manhattan may contain some of his best-loved one-liners (“I think people should mate for life, like pigeons or Catholics”) but the film’s characters are spoiled, petulant children. Too often, it’s like watching a high-school movie populated by fortysomethings, all tediously motivated by he-said, she-said, he-did, she-did.

Woody’s Isaac Davis, a 42-year-old TV writer, is twice-divorced as the film opens, most recently from an “immoral, psychotic, promiscuous” lesbian (Streep) who is currently writing a caustic tell-all book. Isaac’s best friend Yale (Murphy) is having an extra-marital affair with Mary (Diane Keaton); he later attempts to “offload” Mary on to Isaac. For a supposed intellectual, Mary really isn’t awfully bright. Oh, those poor men-children.

Most vexingly, for much of the movie Isaac is dating a 17-year-old high school student (Hemingway). Nobody really baulks. Grand, so, suggests his chum. Writing in The New York Times in 1980, Pauline Kael snarked: “What man in his 40s but Woody Allen could pass off a predilection for teenagers as a quest for true values?”

It’s entirely wrong to judge a work of art by its creator’s behaviour. But almost four decades later – years during which Allen’s son Ronan Farrow has repeatedly railed against the media for its handling of decades-old sexual abuse allegations against his father – and this only fitfully amusing comedy is now majorly compromised by its May-December romancing.

A pretty and problematic picture that leaves a sour taste in the mouth.