I Am Divine review: a pioneer of recreational transgression

I Am Divine - trailer 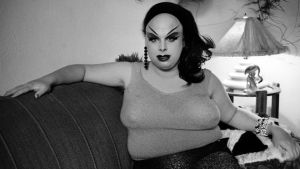 Film Title: I Am Divine

Let’s not get too sentimental. When it comes to sexuality, we live in an increasingly tolerant age and it would be foolish to nostalgically yearn for the scowls and restrictions of an earlier era.

Still, this hugely enjoyable documentary on the well-remembered Divine – late star of John Waters’s early movies and a pioneer of recreational transgression – does serve to remind one quite how outside the mainstream he and his cross-dressing ilk once were. Born and raised in Baltimore as Harris Glenn Milstead, Divine came of age as part of a generation still digesting the experiments and indulgences of Andy Warhol’s Factory.

Waters’s early films were, of course, a great deal less po-faced than those of the downtown New Yorkers. In Eat Your Makeup, Divine played a grotesque version of Jackie Kennedy just five years after the death of JFK. In Multiple Maniacs, the portly phenomenon found himself being attacked by a giant lobster. And so forth.

Yet, for all the fun, Waters’s gang – self-styled as the Dreamlanders – plied their trade on the outer rings of the media circus. They were exotic, forbidden and delicious.

Jeffrey Schwarz, director of a fine documentary on schlockmeister William Castle, allows the sordid romance to emerge over the course of a delightful film that features contributions from some conversational geniuses. Mr Waters is an absolute hoot. The fabulous Mink Stole hits many nails on the head. Divine’s mother, Frances Milstead, in archive footage recalls a doctor calmly telling her and her husband that young Glenn was more “feminine than masculine”.

This is, for the most part, a celebration of Divine’s life unencumbered by guilt or oppression, but we do learn that he yearned to escape from the cult ghetto and become a proper character actor. It seems that he never quite shook off that notorious scene at the end of Waters’s Pink Flamingos.

I mean, really. Can’t a man eat just one dog turd without hearing about it for the rest of his life?

Pinocchio: A gorgeous but dark and unsettling reworking
6

Galway 2020 reinvents itself in safe mode for Covid era
8

The New Mutants: ‘I kept reading all these articles and none of it was true’
10