I Am Belfast review: Mark Cousins paints a vital, intimate portrait of a city

With luscious photography and an insidious electronic score from David Holmes, Cousins’ film finds intriguing oddness in the apparent drabness of the northern capital 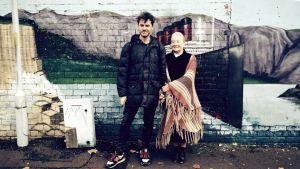 Film Title: I Am Belfast

What is a Mark Cousins film without that critic’s characteristically eccentric incantations? One walked away from his huge The Story of Film with those swaying vowels replaying unstoppably through the resting brain. Sink into I Am Belfast and discover.

Mark’s voice sounds only intermittently throughout the picture. It is Helena Bereen, a warm woman in late middle-age, who steps forward to tell stories of the city that she claims to embody. There is an unmistakable nod here to Mikhail Kalatozov’s I Am Cuba, but this is necessarily a more intimate project than that sweeping saga.

Mark is certainly fond of his home city: just listen how he revels in the exhaustingly sweary conversation between old pals Rosie and Maud (perhaps, only Glaswegians sling off-handed f-words so promiscuously about their sentences). But from the beginning, we are reminded that an iceberg is on the way. In its literal incarnation, it sinks the Titanic that was, famously, “all right when it left here”.

In metaphorical form, it stands in for the insane divisions that still riddle the benighted place. “Is now a good time to talk about it?” Bereen (or “Belfast”) asks an off-screen Cousins.

I am Belfast is at its best when it approaches its subjects obliquely. Blossoming with surprisingly luscious images from Christopher Doyle that mesh with David Holmes’s insidious electronic score, the film stops to stare at ordinary buildings in the manner of Patrick Keiller’s great cinematic essays on London. It succeeds by finding intriguing oddness in apparent drabness. Less successful are the more naïve, explicit flourishes such as the overextended (and optimistic) “funeral for the last bigot”.

No hiccups can distract from the film’s success in capturing the city’s combination – to reference a repeated sensual image – of “salt and sweet”. The city would not be itself without its humorous fatalism. We’re all going to die. All films on Belfast end with Van Morrison.

The Books Quiz: Who wrote the famous line: ‘Hell is – other people!’
10

Steve Wall on his family’s tragedy: ‘It was a year from hell’
Real news has value SUBSCRIBE