Hooray for Nollywood: how women are taking on the world’s third largest film industry 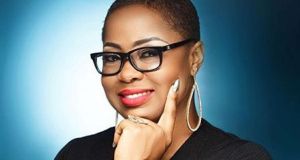 Tope Oshin Ogun: “Women were usually there to cause the downfall of the hero. That’s changing. For me, any project I develop has to have strong females or a female protagonist.”

Nollywood, as we are often told, is the third largest film industry in the world, placing just behind behind Hollywood in the US and Bollywood in India. The numbers are extraordinary; Nigeria produces an average of 50 movies each week and makes some $590 million each year.

Until her unexpected death in 2014, Amaka Igwe was one of the most authoritative figures in Nigeria’s cinematic landscape. Igwe, the writer, director and producer of such well-regarded films as Rattlesnake and Violated, helped transform Nollywood from a cheap and cheerful, amateurish, video- based sector into a professional industry, replete with its own film grammar, genres and pan-African audience.

Igwe’s lasting influence is chronicled in a fascinating new documentary Amaka’s Kin: The Women of Nollywood. The film is the work of Tope Oshin Ogun, herself an award-winning filmmaker, a director, producer, actress, dialogue coach, casting director, and mother of four sons. Igwe mentored Tope directly, holding to the motto: “I will give to you what I have, added to what you have, so you can be more than me.”

“I was an actor,” recalls Tope. “But while I was working for Amaka she noticed that I was more interested in how the director works and all aspects of production and how the movie gets made. I had never thought of directing until she pointed out that I had a director’s brain. So I wanted to be more involved and started to intern for directors I had previously worked with.”

Tope went on to study theatre and film production at Nigeria’s Lagos State University, before briefly relocating to the US to train at Colorado Film School.

To date, she has made 26 movies and directed 350 episodes of Tinsel, Africa’s biggest soap opera. She is the only female to have directed the show. But she is not the only female filmmaker in the industry. Amaka’s Kin gathers together many of Nollywood’s finest practitioners – including Mildred Okwo, Michelle Bello, Stephanie Linus, Omoni Oboli, Blessing Effiom Egbe, Pat Oghre Imobhio, Jadesola Osiberu, Adeola Osunkojo, Dolapo Lowladee Adeleke, Belinda Yanga Agedah, and Ema Edosio – to discuss the challenges that come with being a woman wielding a megaphone in Nigeria.

“A younger woman who was acting for me asked me would I want to direct,” Tope tells me. “There are more of us than there once were but there are still people who think that if you’re trying to become a director, you’re really just trying to be a troublemaker.”

In this spirit, Mildred Okwo talks of a “backlash against women” and Blessing Effiom Egbe notes that some actors “don’t respect you because you are a woman”. Their accounts do not differ wildly from women directors working anywhere else, yet there are traditional gender issues in Nigeria and in Africa that make these women that bit more special.

“We’re all working across different genres,” says Tope. “Michelle Bello makes very successful comedies. My films are more about society and the realities of life. I think what we all have as filmmakers is an attention to detail and story.”

The presence of Amaka’s Kin and their feminised perspective has made some impact on Nollywood’s increasingly technically impressive output.

“Until recently there were very few strong female parts,” says Tope. “Women were usually there to cause the downfall of the hero. That’s changing. For me, any project I develop has to have strong females or a female protagonist. Because I’m drawing on what Amaka did.”

- Amaka’s Kin: The Women of Nollywood will premiere at the Feminist Film Festival, November 18th-20th.