Highest grossing or biggest gross-out? What to catch at Cork Film Festival 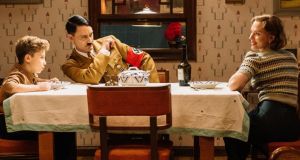 Jojo Rabbit: in this opinion-dividing dark comedy, a young boy in Nazi Germany takes Hitler as an imaginary friend

So far as we know, Pauline Kael never journeyed to Cork Film Festival. The United States’ most famous critic had barely made it into print when the event clocked up its first edition, in 1956. But there is no record of her passing through the city in the month that matters. On the centenary of her birth, some version of Kael will be by the Lee as a new documentary, What She Said: The Art of Pauline Kael, receives its Irish premiere.

Where better? The oldest film festival in the land has, in recent years, gained new energies and again closes out the cinematic calendar with notable brio. Nobody visiting the event should miss the opportunity to catch a programme of the short films for which it has always been famous. Back in the 12th century, Paul Duane, among the nation’s busiest directors, premiered a short written by this writer. He returns this year for a screening of his recent, riotous collaboration with Bill Drummond, What Time Is Death? And so the wheel turns.

Where else will you see potentially the year’s highest-grossing animation and the film that sent pundits running in disgust at Venice and Toronto? Nowhere!

The current incarnation of the event manages a fine balance between outre experiments, mainstream premieres, awards-season contenders and one-off special events. Where else will you see potentially the year’s highest-grossing animation and the film that sent pundits running in disgust at Venice and Toronto? Nowhere! (These are two different films, by the way.)

The expectations for Frozen 2 could hardly be more overwhelming. Its predecessor is, depending upon whether or not you include this year’s “live action” Lion King, either the highest- or second-highest-grossing cartoon ever. It will play to applause at the Everyman. Václav Marhoul’s The Painted Bird, a searing tale of a Jewish boy’s experiences during the second World War, has won ecstatic acclaim but, with its depiction of incest and bestiality, has also scared some audiences into quivering wrecks. It must be seen.

That is not the only film trailing buzzy advance word from major festivals. Few winter releases are quite so anticipated as Robert Eggers’s The Lighthouse. Precipitating pitched battles for tickets at Cannes, Eggers’s follow-up to The Witch stars Robert Pattinson and Willem Dafoe as an odd couple going barmy in a remote lighthouse during the Victorian era. Filmed using antique equipment, the windy, scary, briny tale should play well in a port town.

It has taken a while to get here, but Jennifer Kent’s The Nightingale will disappoint no viewer made of vaguely stern stuff. The electrifying Dubliner Aisling Franciosi stars as a young Irish woman who, following rape and murder, seeks muddy, bloody revenge amid the wilds of Tasmania. It’s a terrific adventure that has much to do with the uneasy relationship between colonised exiles and indigenous people facing potential annihilation.

Nothing fires up a festival better than disagreement, and there are sure to be furious debates following the screening of Taika Waititi’s Jojo Rabbit

Nothing fires up a festival better than disagreement, and there are sure to be furious debates following the screening of Taika Waititi’s Jojo Rabbit. No major premiere at Toronto has, in recent decades, so divided opinion. Concerning a young boy in Nazi Germany who takes Hitler as an imaginary friend, the dark comedy won the influential People’s Choice by Lake Ontario, but it also attracted some furiously unimpressed reviews. It will be intriguing to hear if Corkonians think Waititi has managed this tricky balancing act.

There has been more consensus behind James Mangold’s Le Mans ’66, starring Christian Bale and Matt Damon in the story of that race, and Scott Z Burns’s incisive, forensic The Report, a consideration of the United States’ involvement in torture after 9/11.

Look out also for a rare accompanied screening of Paul Wegener’s great silent film The Golem and a first domestic outing for the Irish coproduction Sweetness in the Belly. That last film stars Dakota Fanning as a woman adrift in Ethiopia during the last days of the Haile Selassie regime. The event closes with Magorzata Szumowska’s already greatly praised The Other Lamb. Another Irish coproduction, Szumowska’s picture, which sold at Toronto, concerns disturbing doings in a sinister cult.

And that’s just the mere skin on the pudding. There’s buckets more to see at a bash that, even after all these years, goes from strength to strength.