Hidden Figures review: A winning drama that reaches for the stars

It’s tricky to distil hard fact from light fiction, but the extraordinary story shines throughout this serious Oscar contender 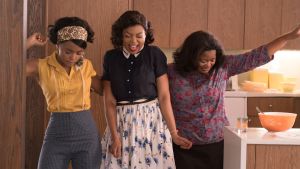 This enormously enjoyable biographical drama opens in 1961 with Katherine Johnson (Taraji P Henson) and colleagues Dorothy Vaughan (Octavia Spencer) and Mary Jackson (Janelle Monáe) working on the unreliable car they use to drive to work. When a white police officer pulls over to investigate, he is surprised to learn that these African-American women work for Nasa and promptly offers them an escort. All the better to get a jump on the Commie space programme, he reasons.

“Three negro women are chasing a white police officer down the highway in Hampton, Virginia, 1961,” marvels Mary. “Ladies, that there is a God-ordained miracle!”

Working from Margot Lee Shetterly’s bestseller Hidden Figures: The Story of the African-American Women Who Helped Win the Space Race, a screenplay co-written by the director and Allison Schroeder, maintains this light, humorous touch, while exploring much heavier, less humorous themes of gender and racial disparity.

Naturally, artistic licence and occasionally broad strokes are utilised to allow the material to bounce. But the extraordinary accomplishments of the women mean that you never can tell hard fact from light fiction. A running gag, literally – set to Pharrell tune Runnin – sees Katherine galloping across the Nasa campus in heels every time she needs to use the bathroom; having been promoted to the Space Task Group, the nearest “colored” rest room is located half-a-mile from her desk.

The scene in which her manager Al Harrison (Kevin Costner, re-rocking his Jim Garrison crew cut from JFK) puts a dramatic full stop to bathroom segregation is an embellishment, yet a later, show-stopping development involving Katherine and the astronaut John Glenn is historically accurate.

Cold-War rivalries loom large for the Space Task Group, where Katherine must distinguish herself despite the condescension of head engineer Paul Stafford (Jim Parsons). Elsewhere, mathematician Dorothy seeks to master the new IBM and takes on her patronising white-lady supervisor (Kirsten Dunst) while Mary has to go to court to take the courses she will need to become Nasa’s first black female engineer.

No people have ever deserved their own movie more than they do.

And what a lovely movie this is. Fans of The Help will surely enjoy the bonding and cheeky gal talk between the charismatic central trio. A jaunty soundtrack and Mandy Walker’s brightly coloured cinematography allow the feelgood factor to really pop. A romantic sub-plot between Katherine and dashing US Army officer Jim Johnson (Moonlight’s Mahershala Ali) is one of many appealing sweeteners for the non-STEM community.