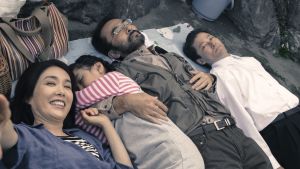 Toshio (Kanji Furutachi) lives in the suburbs with his wife, Akie (Mariko Tsutsui), and young daughter, Hotaru (Momone Shinokawa). One day, Yasaka (Tadanobu Asano), a former acquaintance, turns up at the small machine shop Toshio operates out of his garage.

Toshio gives Yasaka, who has just been released from prison, a job, although neither man seems particularly happy to see the other. Akie is initially discombobulated by this new presence, but slowly, she warms to the mysterious Yasaka, who takes more interest in her and in her daughter’s ear-battering harmonium playing than her distant husband does.

Has this apparently gentle guest served 11 years for murder in lieu of Toshio? Is the devoutly Christian Akie falling for him? Domestic strife looms, until a horrific act of sexual violence leaves everyone in the mood for vengeance.

Koji Fukada’s new film initially looks like a tranquil family drama, something that might make for a pleasing double bill alongside the quietly compelling contemporary Japanese cinema of Hirokazu Koreeda (Our Little Sister) or Ryota Nakano (Her Love Boils Bathwater).

There are early hints of brutality and oddness. An early theological dinner-table conversation concerns the afterlife of a mother spider that allows her children to eat her. Harmonium soon twists to resemble an unwanted guest film, wherein a new element threatens to disrupt and usurp the bourgeois family order.

But, with a nod to Michael Haneke, writer-director Fukada isn’t done toying with us just yet.

The second half of this sadistically playful film – set eight years after the first, and centred on the care of a now quadriplegic and nonverbal family member – powers toward full-blown Shakespearean tragedy. A tale of bad-ass bad karma, as the Bard might not have put it.

Dark jokes serve as dumbshows: “Do we know why we asked you to come? So we can kill you,” Akie tells a hapless kid (Taiga), before adding the “punchline” – “I’m lying” – in a mirror image of an earlier joking-not-joking exchange. A darkly ironic beach selfie prefigures the horrendous denouement.

The softness and straightness of the performances obscure the monstrous melodrama underneath. Director of photography Kenichi Negishi’s framing seems to shrink as the various players are increasingly boxed in by impending doom.

We can feel their frustration and anger, yet the script withholds satisfactory motivations and explanations. If it weren’t so glum, one might well feel like a victim of a brilliantly cruel and vexing prank.