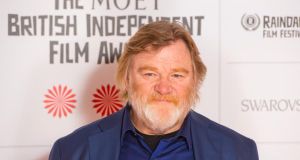 Gleeson won best actor for his performance as a priest condemned to die in John Michael McDonagh’s controversial Calvary. Gleeson, who received the award from actors Olivia Colman and Olivia Williams, beat Oscar contenders Benedict Cumberbatch and Timothy Spall to the prize. Talk of an Academy Award nomination for the Irish actor is, however, still a little premature. This year’s Oscar race is more competitive than usual and Calvary will fight to get seen.

Andrew Scott, the charismatic Dubliner best known for his role as Moriarty in Sherlock, won his award for the role of a conflicted activist in the heart-warming drama Pride. Matthew Warchus’s film concerns the unlikely coalition between gay campaigners and strikers during the 1984 UK miners dispute. That film also took the top award for best British Independent Film of 2014.

It’s been a busy week for Scott. On Thursday it was confirmed that he was to take a role in the next James Bond film, SPECTRE. “I’m quite used to keeping secrets - you just learn to nod and smile,” he said when asked about keeping the Bond news quiet.

There was further good news for domestic film with Jon Ronson and Peter Straughan winning best screenplay for Lenny Abrahamson’s Frank. Stephen Rennicks took the gong for best technical achievement in recognition of his angular music for the extraordinary picture. Much of Frank, starring Michael Fassbender as a troubled musician, was shot in Ireland and, like Calvary, it received funding from the Irish Film Board.

Best director at the British Independent Film Awards went to Yann Demange for the terrific 71. Though the film deals with events in Belfast during in the 1970s, it was shot largely in the north of England with no significant domestic investment and thus, unlike Calvary and Frank, it does not qualify as an Irish co-production.

How to be Nowhere: sharp, lyrical take on Central American violence
7

Why was James Joyce’s daughter Lucia written out of history?
9