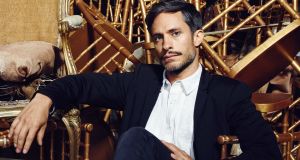 Remember the Oscars? Before that business with the envelope? Remember when Meryl Streep went to town with her Trump-bashing acceptance speech for the Cecil B DeMille Award at the Golden Globes? “Overrated” Meryl, always a tough act to follow, ensured that the Academy Awards would comparatively reticent on presidential matters.

And then Gael Garcia Bernal – star of the incoming Pixar film Coco – took to the stage to present the Oscar for Best Animated Feature Film: “As a Mexican, as a Latin-American, as a migrant worker, as a human being, I’m against any form of wall that separates us.”

We should not be surprised. The actor has previously railed against the current US President for his outrageous characterisation of Mexicans as “rapists and drug-dealers”, and has long been a politicised and civic-minded chap. Aged 14, he was teaching Mexico’s indigenous Huichol people to read. Aged 15, he demonstrated during the Chiapas uprising.

I was going crazy with happiness when they mentioned my name after they opened the envelope. Wonderful

He has subsequently worked with Oxfam and Amnesty International and has campaigned for fair trade, migrant rights, economic parity, and Syrian refugees. In 2005, he and fellow-actor Diego Luna founded the Cine Ambulante project, which screens award-winning documentaries from around the world at public parks and on streets, for free.

His acting CV reflects his political bent. The 38-year-old has played Che twice; once in TV miniseries Fidel, and then in The Motorcycle Diaries. In 2014, he starred as the Iranian-Canadian journalist Maziar Bahari in Jon Stewart’s directorial debut, Rosewater, and also played a shaman who takes on deforesters in the resistance drama The Burning. He has produced a series of films with Amnesty International, detailing the dangers faced by Central American migrants, and another series of TV documentaries on the unsolved murders of more than 300 women in the border city of Ciudad Juarez.

A political being, both on and off screen, I wonder, conversely, if there are roles he has refused for political or ethical reasons?

“Maybe I have,” he says, slyly. “But, it’s far more interesting to say that I’ve said yes to a few roles because of political reasons. Mainly, because they carry a political complexity that I’m excited to embrace and explore in a film. Those are the type of films I like to watch as well.”

He ought, one feels, to be self-righteous or overly-earnest. Instead he’s fantastically good fun and a gifted comic. If you haven’t caught his antics opposite old pal Luna in the Mexican comedy Rudo y Cursi (2008) or his ridiculous turn as a drug lord in the Will Ferrell telenovela Casa de Mi Padre (2012), then you really must make haste. He has, additionally, just landed a Golden Globe for his turn as an unconventional Latin American conductor in Amazon’s much-admired hipster comedy Mozart in the Jungle. Nobody looked happier to receive a gong that night.

The show has been an amazing journey, he says. “It was quite daunting to shake the baton for the first time. Never mind doing it in front of real musicians. It’s one of the craziest experiences acting has given me. To conduct the LA Philharmonic for real - which we did for the opening of the second season - is way much more surprising and shocking than winning a Golden Globe. Mind you, I was going crazy with happiness when they mentioned my name after they opened the envelope. Wonderful.”

Today, the actor is in London on promotional duties for Neruda, a twisty literary biopic of the Chilean politician-poet. He arrived in this same city in 1998, the first Mexican to study at the Central School of Speech and Drama. He worked (illegally) in bars and lived in grotty bedsits. These days, his London stopovers are a little more comfortable.

“London was very different altogether,” he says. “Actually, London has changed more than just my experience of living there. All the neighbourhoods became quite similar amidst the rush that people go through when living there. It feel that people have less time to wonder than when I was a student. Or maybe it’s me who appreciates it differently.”

Neruda reunites Bernal with director Pablo Larraín (Jackie), for the first time since their collaboration on 2012 political drama, No, a thrilling examination of the 1988 plebiscite, when the Chilean people pondered whether or not dictator Augusto Pinochet should stay in power for another eight years.

By now, they have developed a kind of telepathy, says the actor. “It was great to be back among the family that Pablo has been building and growing around him over many years,” he says. “We are similar in lots of ways. But what I love about Pablo is that there is always something new about the angle he takes. In No we go through the campaign through the eyes of advertisers and publicists. With Neruda, it would have been impossible to make a biography, because he lived many lives not one. So the film needed a new way.”

That new way casts Bernal as the Chief of the Investigations Police of Chile Oscar Peluchonneau, or at least as Larraín’s fictionalised version of him.

“I play the detective that persecutes Neruda after he was forced into exile in 1947,” says Bernal. But we didn’t base the character only on him. There was a police chief with that name. But this is the product of dreams and poems and imagination.”

He laughs. “Who maybe becomes real in the end.”

Family, work, the interesting discussions; everything happens in Mexico. At least for me

“He’s very straightforward,” says Bernal. “He believes in law and order. We played around with the humour. Because he’s a dangerous point of view. But he’s also ridiculous.”

Cultural legacy
Bernal, meanwhile, is building a cultural legacy of his own. Born to Patricia Bernal, an actress and a model, and, José Ángel García, an actor and director, and raised by his mother and stepfather – the cinematographer Sergio Yazbek – has been in the spotlight for most of his life.

He was still a baby when he made his first television appearance. Aged 11, he scored his first role in a telenovela. Three years later, he made a kids’ show with Diego Luna, the actor who would go on to be his co-star in Y Tu Mama Tambien and Rudo y Cursi. The pair, who co-founded the production company Canana Films in 2005, have remained best pals ever since. I wonder how Bernal felt watching his oldest chum plotting with the Rebel Alliance in Rogue One: A Star Wars Story.

“It was great. He did a very good job. I liked the film a lot. I like the fact that there are less super heroes and that the actual rays from the weapons can kill the characters. Diego also brought a lot of truth to the world they build. If there is such thing as truth in Star Wars.”

Bernal, who currently divides his time between Mexico, Buenos Aires (where he has two children with ex-partner Dolores Fonzi), New York (for Mozart in the Jungle) and wherever else work brings him, has no intention to relocate to La La Land.

“It’s impractical and far away from my centre of energy. Family, work, the interesting discussions; everything happens in Mexico. At least for me.”