François Ozon: ‘Catholics don’t like that their religion is always linked with paedophilia’

By the Grace Of God, about sexual abuse by a priest in Lyon, focuses on the perspective of the survivors 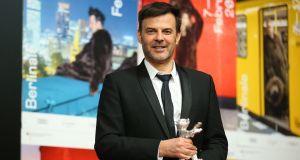 François Ozon, winner of the Silver Bear Grand Jury Prize for By the Grace of God, during the Berlinale International Film Festival in Berlin earlier this year. Photograph: Thomas Niedermueller/Getty Images

François Ozon is the genre-hopping auteur behind such psychosexual provocations as Swimming Pool (2003) and L’Amant Double (2017). His newest film, By the Grace of God, concerns a still unfolding legal drama and decades of clerical sexual abuse. And yet, for many critics, it’s equally shocking to find Ozon, director of such women’s pictures as 8 Women, Potiche, and Frantz, venturing into the male-centric world of By the Grace of God.

“I’m not surprised about what people say about me, you know?” says the French director. “I’m used to it. For me, it was a new challenge. It was a new kind of film for me to make – a new adventure.”

By The Grace Of God, which won the Silver Bear at this year’s Berlin Film Festival, is based on the story of a priest in Lyon who abused children with impunity for decades, and the cardinal who covered up the allegations and failed to intervene.

Fr Bernard Preynat’s victims began emerging in the 1990s. The first abuse claim against Preynat was made in 1991; since then, more than 70 victims and their families have spoken out and formed a victims support group.

Their efforts led to Preynat’s indictment in 2016 and defrocking; he will face trial in 2020. Earlier this year, Cardinal Philippe Barbarin, his superior, was sentenced to six months in prison (suspended) for failing to alert authorities. It was a legal decision that shocked many, including the victims and their families; many of the allegations, although reportedly acknowledged by Preynat, were abuses committed against boy scouts in the 1970s and 80s, crimes that had lapsed due to the statute of limitations.

By the Grace of God appears as part of a broader genre of clerical abuse dramas, films including Spotlight, which won the Academy Award for Best Picture in 2016, and Kler, a hard-hitting 2018 Polish box-office record-breaker by director Wojciech Smarzowski.

“I have not seen the Polish film as that was not released in France,” says Ozon. “But I saw many documentaries including testimonies from men and women. All the facts I had were so strong I didn’t need to do much research beyond that. Of course, I saw the film Spotlight but that’s more about journalistic practice and society. My film is focused on the victims. It shows that the damage for an abuse victim is a ticking time-bomb, for both the victim and for a family. Everybody around can be damaged by such a thing.”

Ozon enjoyed his Catholic education, especially “being in plays and being in the choir” until his teenage years brought about sexual realisations that were in contrast to church teachings. He speaks about “losing his faith” as though it were a far from wrenching experience. He had, in fact, no interest in making a film about the church or clerical abuse until he happened upon a website run by survivors of Preynat’s abuse.

“I wanted to make a film about male emotions and about grown man showing their sensitivity,” says Ozon. “I was looking for a story to go with those themes and by chance I read some testimonies on the internet of these men who were victims when they were children. So I decided to meet with them and make a kind of a journalistic investigation to understand what had happened exactly. Over those conversations I thought about a documentary but then decided to make the film. The idea was more to make a film about the victims. I was maybe naive because I used the real names of the cardinal and the priest that you see in the film. What you see in the film about these men is already in the French press, you know? It’s not a scoop. So I was more interested in the perspective of the survivors and about the links between the families and the survivors.”

The film skilfully employs a series of carefully constructed flashbacks to convey the degree of power and access Preynat had over his victims.

“There were big discussions with the producers about the flashbacks,” admits Ozon. “We had this feeling that it was very important to show these men when they were children, to show them when they were eight, and to show the attacks on them. I didn’t want to show anything explicit, of course. But I wanted to show how much these children are paralysed in that moment, how they don’t understand what’s happening to them, that they’re like lambs that go to the wolf. When you are abused as a child you have a kind of dislocation. You are too young to understand what happened to you and so you decide to go and live your life and to play again as if nothing happened. The trauma happens later.”

Borrowing a trick from Alfred Hitchcock’s Psycho – a loan acknowledged by the director – Grace sets up a protagonist only to pass the baton along. A triptych of stories is ushered in by Alexandre (Melvil Poupaud), a 40-year-old Lyon family man and devout Catholic, who was one of many preteen boys who was sexually assaulted by Bernard Preynat (Bernard Verley) during the 1980s. When Alexandre discovers that Preynat remains active in the diocese and has continuing access to children despite many complaints, he appeals directly to Cardinal Philippe Barbarin (François Marthouret), who processes ignorance. Worse still, Alexandre is brought together with his abuser so they might hold hands as they pray for healing.

His frustrations do, at least, inspire other victims to come forward, including the fiery François (Denis Ménochet), an atheist who wants to bring the church to reckoning, the more circumspect Gilles (Éric Caravaca), and Emmanuel (Swann Arlaud), the most traumatised of all the victims. The characters are, like much of the testimony and mediations, all drawn from real life. Only the surnames of the men have been changed.

“I should say 85 per cent of what is in the film is real, “ says Ozon. “What I changed were small things like the fight between the two brothers and the family getting together for the night of Christmas. These kinds of scenes were used to dramatise what was going on in the family. The first story was obvious because Alexander was the first one. He was alone when he came forward. After that there was a choice of more than 70 victims to focus on. From there we found François. I knew I’m looking for a third character and I asked the others to meet someone who maybe doesn’t have the structure or support they have around them. And that was Emmanuel. I met him and he was so touching. After that you let them guide you.”

The title of the film – Grâce à Dieu in the original French – refers to Cardinal Barbarin’s now notorious response when he was asked why he had not acted earlier to remove Preynat from work that allowed him access to children: “By the grace of God, most of these cases are now out of date,” he said. For that reason, Ozon and his cast and crew did not reveal the title until the film was submitted to Berlin.

“I shot the film in sequence and I didn’t give the title because those words ‘by the grace of God’ are very famous in France,” says Ozon. “It was on the top of the news when Barbarin said that. The only way I could be free to make the film I wanted to make was to make it under a fake title. But of course once I gave the right title, and everybody understood what it was about, immediately all the people of the church tried to stop the film, especially the priest and [volunteer church psychologist] Régine Maire, the woman we see in the film. They haven’t seen the film but they wanted to stop it anyway. So it was a big fight.”

Many Catholics are shocked and upset about the situation; they don’t like that the Catholic religion is always linked with paedophilia

That battle continued into the film’s Berlin bow and beyond. The festival print ended with a title card announcing that the verdict in Barbarin’s trial was imminent. Two court cases almost scuppered the film’s French release.

By the Grace of God has proven an extraordinary success in France, earning more than $7.2 million on its theatrical run.

“It was a very strong reaction from audiences, especially because many Catholics came to see the film in France,” says Ozon. “Many Catholics are shocked and upset about the situation; they don’t like that the Catholic religion is always linked with paedophilia. I was surprised to have more than one million admissions for such a small film. But I soon realised how many people were touched by the story, especially in the city where it was shot. Many people came up to me after screenings and said: you know, that happened to me. Both girls and boys. Not just cases from the church, because of course 80 per cent of paedophilia happens within families. I was so shocked to meet so many people, especially girls, that had problems with paedophiles when they were children.”

By the Grace of God is released October 25th