Fifty Shades of Black review: not great, but still 50 times better than the original

The Wayans approach to comedy might be simple, but there’s still fun to be had seeing the execrable Fifty Shades of Grey get a good whipping 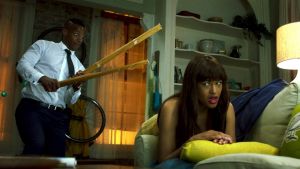 Cane and able: Marlon Wayans and Kali Hawk in Fifty Shades of Black

The Wayans approach to comedy is simple and, for fans, effective: Scary Movie is Scream with the same withering, raucous put-downs one might hear in a black theatre or read on black Twitter; Dance Flick is every dance flick with similarly themed asides. And so on. This is the comedy of recognition and repetition. With smart-alecky comments.

There is, accordingly, not too much to differentiate the plot of Fifty Shades of Black from the pitiful EL James’ S&M gunk it seeks to lampoon. Thus, handsome, mysterious billionaire Christian Black (Wayans) is interviewed by the talented Kali Hawk’s clumsy virgin Hannah. (Sample question: “Is you gay or is you gay as a motherfo?” Sample answer: “Just because you touch a penis doesn’t mean you’re gay especially if it’s for money or crack”).

Christian soon woos the girl with romantic promises: “A non-disclosure agreement protects both you and me but mainly me” and takes her to his ‘playroom’, where the viewer is treated to a montage of previous female visitors, all doing their own version of ‘Hell, no’.

Hannah’s right-minded response (“Fuck this shit I’m out”) foreshadows a sequence that refashions one of last year’s most misogynistic scenes into feminist revenge fantasy, as the heroine shouts out the names of abused movie characters - Lupita Nyong’o in 12 Years a Slave gets a namecheck - while giving Christian a taste of his own medicine: “This is for the little white girl in 50 Shades of Grey,” she cries, meta-textually, “Did she have to be naked the whole fucking movie? That shit was just gratuitous.”

There will likely be more sophisticated comedies this year – or possibly this week – but no film deserves a pelting with rotten fruit quite like Sam Taylor-Wood’s po-faced bondage nonsense and co-writer, producer and star Wayons has been ‘round the orchard.

No one could claim that the quick-fire nods to Whiplash or Magic Mike are big and/or clever. But here are the numbers: 50 Shades of Black does, at least, have to good grace to be 50 times more entertaining than the original. The leading twosome use 50 expressions per minute where Dakota Johnson and Jamie Dornan use none.

There are rape jokes that aren’t any better or more welcome than the ones in Deadpool. But there are also welcome swipes at Bill Cosby and white privilege: “I’m standing my ground” shouts Black’s patronising adopted mother Claire (Jane Seymour) after she tasers Hannah.