Exorcism: 'It’s the last chance for a lot of people' 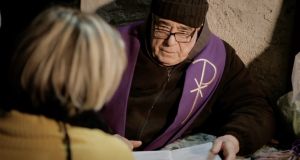 Fr Cataldo Migliazzo who required some initial coaxing to participate in the film.

Federica Di Giacomo’s film opens with a woman writhing and howling when a specially trained priest douses her with holy water. The subject laughs maniacally and shrieks: “Leave me alone, you bastard; she is mine, she is mine.”

Have these folk all studied Linda Blair’s performance in William Friedkin’s iconic 1973 film The Exorcist? Is there an element of performance? Not at all, says the director.

“This is not related to culture,” she says. “Some of the people are very young. They have no cultural connection to The Exorcist. What you see has to do with their relationship with the body and bodily expression. It would be incredible to think they behave like this just because they saw it in a movie.”

There are moments of accidental comedy in Di Giacomo’s film, which won the top documentary prize at the Venice Film Festival. In one scene, the priest is unhappy about a painting of a Madonna and Child (it should be in a church, not a private house, he says).

He’s deeply suspicious of a collection of cuddly toys belonging to one supplicant: “Get rid of the dolls,” he warns; “Especially the black one.” He frequently compares various afflicted females to animals. (One unfortunate is characterised as a “wild kitten with a crushed tail”.) He performs one exorcism by mobile phone before hanging up on a festive note: “Happy Christmas, and best wishes to your husband.”

Against these absurd moments, Libera Nos is studiously non-judgmental about the work of Fr Migliazzo and fellow exorcist Fr Carmine. Di Giacomo has not been a practising Catholic since she was 15, but says she prefers to believe “there may by something, rather than nothing out there.” She speaks almost protectively about the exorcists.

The director and her crew filmed Fr Migliazzo over three years but he did require some initial coaxing. “Fr Cataldo (Migliazzo) wasn’t happy at first. We followed him every week for many months. And only then he understood we were serious about the film. We really wanted to understand. We didn’t want to judge.And he also wanted to explain what he was doing to a larger society. He wanted to bring attention to the amount of suffering he was seeing in people.”

The participants, she says, hail from “all social classes” and many have already exhausted other avenues for treatment. One woman has symptoms of MS but nothing is showing up in her MRI scan. One tattooed drug addict can’t seem to quit. Elsewhere, there are ill-defined cervical pains and suspected evil spells.

“What I was really interested in was the obsessive search for healing,” says the filmmaker. “It’s difficult to have a disease that has not been named. Human beings want want to have an explanation for suffering.

“It’s the last chance for a lot of people after they go to psychiatrists, psychologists, doctors, alternative medicines, and magicians without getting any real diagnosis or a real cure. So they are desperate. The families of a lot of these people want to call in the priest. In a way, it’s a wider search for the meaning of life. You can take pharmaceuticals for psychiatric problems, but it doesn’t give meaning.”

Libera Nos makes startling transitions between priests bellowing about the “blood of Jesus”, then calling about routine cholesterol checks. Parishioners hiss and moan, then go shopping. Exorcism is depicted as being part and parcel of Italian life but elsewhere it’s a growth industry.

The final sequence in Libera Nos takes place at an exorcist conference in the Vatican. In 1999, the Vatican issued its first new guidelines on exorcism since 1614, urging priests to take modern psychiatry into account when dealing with a request for an exorcism. In 2014, Pope Francis recognised the statutes of the International Association of Exorcists – a group of 250 priests battling the forces of evil across 30 countries – under canon law.

In order to deal with increasing demand, all French dioceses have appointed at least one exorcist. In Spain, the archdiocese of Madrid is desperately working to appoint more exorcists. The number of trained US exorcists has risen tenfold in recent years. In Rome and Milan, too, the number of exorcists has recently doubled.

Last year, speaking to an ABC news affiliate, Fr Vincent Lampert, an Irish-American, Indiana-based priest – and one of 50 Catholic priests in the US specifically appointed to perform an exorcism – suggested that requests for exorcisms in the US are at an all-time high.

Back on home-ground, the Catholic Communications Office (CCO) suggests that while the church does require that each Irish diocese should have a trained exorcist (that is, someone who knows how to distinguish the signs of demonic possession from those of mental or physical illness), our country has not yet been swept up by this current global vogue for casting out.

“Exorcisms are very rare here in Ireland and this office has not been made aware of any cases of ‘exorcism’ in Ireland in recent years,” says Katie Crosby, from the CCO at Maynooth. “From time to time, dioceses will get requests for help in this area. Dioceses would refer people to one or two priests with training and expertise in this area. In most cases, it will emerge after several meetings that it may be a medical, psychiatric or psychological problem, and they are then referred to medics with expertise.”

Libera Nos is available on demand.

Ireland has a long history with the “dark sacrament”. In the mid-20th century, two Irish seminarians – trainee priests Sean O’Grady and Thomas McGinn – deemed themselves possessed and threw themselves from the same window, in St Patrick’s College, Maynooth some 19 years apart.

In their 2009 book, The Dark Sacrament, authors David Kiely and Christian McKenna chronicled various Irish exorcisms, including an inter-faith effort in Co Derry, where Fr Pat Collins, a Vincentian, Dublin-based priest, joined forces with a Church of Ireland exorcist, Canon William Ledrum, in order to cast a malevolent spirit out of a young boy. Earlier this year, Malachi Martin’s Hostage to the Devil, the late Co Kerry priest’s account of five exorcisms, was used as the basis for the Netflix film of the same name.