Elliott Gould at 80: For my money, the greatest American actor

Tara Brady: He makes you forget he’s acting, and is the best thing in every film he’s in 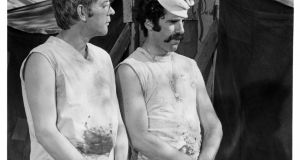 Donald Sutherland and Elliott Gould standing with dirty shirts in a scene from the film ‘M*A*S*H’, 1970. Photograph: 20th Century-Fox/Getty Images

When the American Film Institute compiled a shortlist of greatest screen legends of American film history in 1999, the criteria was limited to Classical Hollywood and the poll yielded a very fine list of Golden Age stars including Humphrey Bogart, Katherine Hepburn, Cary Grant, and Bette Davis.

Unhappily, the AFI’s definition precluded the possibility of voting for Elliott Gould, who, for this writer’s money, is the hands down, no-contest greatest American actor.

Gould, who turns 80 this week, has certainly put in the hours. Born in 1938 and raised in Brooklyn, he began his lifelong career in show business when his mother enrolled him in Manhattan’s Professional Children’s School. He began appeared on Broadway in the 1950s, joining the chorus lines of Irma La Douce (1960) and Say, Darling (1961), before landing his first lead role in I Can Get it For You Wholesale, opposite his future wife Barbra Streisand.

His career skyrocketed in step with counterculture with a triumvirate of 1969 hits: Paul Mazursky’s free-love comedy Bob & Carol & Ted & Alice (for which the actor was shortlisted for an Oscar), the Richard Rush campus unrest dramedy Getting Straight, and Robert Altman’s satirical takedown of military machismo, M*A*S*H.

Gould and Altman clashed on set – indeed, everyone and Altman reputedly clashed on that set – but the actor and director would go on to collaborate on several of the best films to emerge from post-classical Hollywood: California Split and The Long Goodbye. The opening scene of the latter film, in which Gould’s Phillip Marlowe is woken up by a cat and is subsequently forced into a trip to the shops on the animal’s behalf, is brilliant, peak Gould.

It’s arguably not as technically accomplished a turn as his arrestingly terrifying, dark-souled archaeologist in Ingmar Bergman’s The Touch or as the blunt titular septuagenarian in Fred Won’t Move Out, but The Long Goodbye’s cat scene offers the best illustration of what Elliott Gould can do better than anybody: he makes you forget that he’s acting. Watching the mumble-off between Gould and Sterling Hayden’s deranged Hemingwayesque author in the same film, his flinching encounter with violent mobster Augustine (Mark Rydell), and his drive down to Mexico, it feels like Altman is stalking an unknowing Gould with a camera.

It’s that quality which ensures that Gould is always the best thing in any given project. His turn as Monica and Ross’ father in Friends is the only compelling reason to work through the boxset. The most entertaining swindle in each of the “Ocean’s” films, is seeing Gould walk off with the picture every single time.

There is much movie lore surrounding the 1971 collapse of A Glimpse of Tiger, a film that ought to have cemented his reputation, but instead led to the wilderness and a decade of mostly oddball projects and family films. (He is, appropriately enough the voice of God in the otherwise unremarkable Biblical animation, The Ten Commandments.)

Since the turn of the millennium, however, the actor has repeatedly knocked out it of the park every chance he gets. In a better, smarter world he would have been nominated (at least) for an Academy Award for his turn as Edward Norton’s exasperated teacher in American History X or as Paul Dano’s therapist in Ruby Sparks.

In a better, smarter world, an executive from Warner Bros, following a moment of intellectual transcendence, would be rocking up to Elliott Gould’s house at this very moment with a blank cheque in one hand and a spec script for Batman Beyond in the other.