The supposedly liberal entertainment industry has happily given a platform to this ‘bozo’, ‘punk’, ‘mutt’

Donald Trump courted celebrity throughout his career and appeared in numerous films and tv shows throughout the 1980 and 90's. 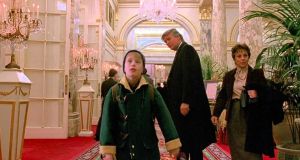 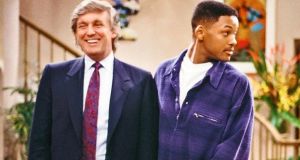 Donald Trump in a 1994 episode of The Fresh Prince of Bel-Air with Will Smith. 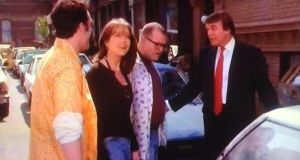 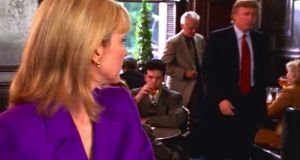 Samantha Jones, played by Kim Cattrall, looks back at Donald Trump in an episode of Sex and the City. 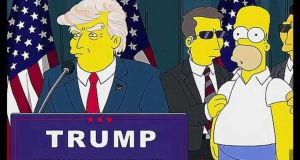 Donald Trump even featured in The Simpsons as a presidential candidate – years before it actually happened.

People are saying that Donald Trump is the greatest star of TV and movies. Big star. You’d better believe it. Nobody wants Crooked Hillary on their show. Total loser. Donald J Trump is the king of cameos. But where’s his Oscar? Corrupt liberal media fixes the system again.

To be fair, Donald Trump doesn’t rate his abilities as an actor all that highly. “I don’t think the legendary Clark Gable has anything to fear, I must tell you,” he once remarked in an unprecedented outburst of humility.

But there is certainly enough of Trump out there on TV and film. Beginning with an appearance on the sitcom The Jeffersons in 1985, That Donald (not The Donald, please) has clocked up more than 20 credits. The appearances are almost always brief. They almost always involve versions of this public persona.

In 1999, Trump made one of several turns on Sex and the City. “Samantha. A Cosmopolitan. And Donald Trump. You don’t get more New York than that,” Carrie says while the urban orang-utan squats in the corner of a plush bar. There is a partial truth here. Sex and the City deserves praise for loosening patriarchal attitudes to female sexuality, but it also promoted a recreational acquisitiveness that sits comfortably with the Trump aesthetic.

“Donald Trump gave me my first Emmy,” Cynthia Nixon, who played Miranda on the series, told this writer last week. How did he get where he is now? “It’s partly a misogynist thing. People don’t like Hillary Clinton for a whole host of reasons, but mainly they don’t like her because she’s a woman who doesn’t work to ingratiate herself.”

All true. But it would be naive to ignore the gut-fuelled passion for the semifictional version of Trump we see behind the podium and in his bewilderingly numerous cameos. There is, in the TV series particularly, a sickening reverence for this sack of orange diarrhoea. He is nudged on stage and, once the applause has died down, the cast begin licking up those bits of Trumpian matter that have oozed through unblocked orifices.

His 1994 turn in The Fresh Prince of Bel-Air offers an unlovely example. Following a typically moronic misunderstanding, the Banks family come to believe that Trump wishes to buy their house. Trump and Marla Maples, his then wife, enter to the expected sycophantic ovation. His head in a spin, Carlton, the most money-hungry of the family, exclaims “The Donald!” before passing out like a Victorian lady who’s just encountered Lord Kitchener in the powder room. There is no hint of satire. Trump is not presented as a figure of fun. The show acquiesces fully with Trump’s desire to promote himself as a master of the universe. Indeed, it allows him a rejoinder to his already abundant critics. “Everybody’s always blaming me for everything,” he says with a woodenness that would not have caused Gable to beware.

Sometimes the TV series go further and present Trump as a fount of munificence. His 1997 turn in an episode of The Drew Carey Show is not entirely unamusing. Carey and his Cleveland crew, visiting New York for a baseball game, discover the streets packed with Gotham celebrities. Carol Channing is in the car behind. Trump is idling on the pavement. After making a few sarcastic remarks about their home in Ohio (ultimately unwise given that state’s importance in presidential elections) he offers them a seat in his box at Yankee Stadium. Fair enough. This isn’t Curb Your Enthusiasm or The Larry Sanders Show. The makers of Drew Carey weren’t going to ask Trump to play himself as a sexually rapacious, pathetically boastful, overgrown frat boy with a dead squirrel on his head. But it takes some ego to accept a role as the kindliest robber baron on the eastern seaboard.

One thinks of North Korean television reports celebrating Kim Jong-il’s ability to play a round of golf in 34 shots. There’s more of this in Spin City, during which an apparently besotted Michael J Fox feels it necessary to name both of Trump’s books (then “available in all good stores” one assumes) before presenting him to the mayor.

In a 1997 episode of Suddenly Susan – an ill-remembered Brooke Shields vehicle – That Donald is presented, at a poker game, alongside John McEnroe as a constituent spirit of red-blooded American manhood. Later, Kathy Griffin’s character, pitching a magazine to Trump, displays a mock-up cover that names Trump as America’s next president. (Three years later a notably less obsequious episode of The Simpsons made a similar prediction.) You can see more Trump toadying in The Nanny, The Associate and the short-lived 1994 reinvention of The Little Rascals. Oddly, despite being aimed at young kids, it is the last show that comes closest to satirising Trump’s conspicuous avarice. “You’re the best son money can buy,” he says to a young soapbox derby competitor.

It is little wonder that Trump has come to the conclusion that angels are fighting to carry him towards the right flank of God. The entertainment industry, despite being run by hated liberals, has happily rolled over and allowed itself to become a platform for this bozo, this punk, this con, this bullshit artist, this mutt who doesn’t know what he’s talking about. (That Donald hasn’t sued Robert De Niro yet, so I must assume we can use the words the actor uttered in a recent video.)

Trump’s appearances on film have done little more to reveal the monster within. You can see him directing Macaulay Culkin towards the lobby of the Plaza Hotel in Home Alone 2: Lost in New York. He praises the title character in Zoolander. In a forgotten 1995 Imax film, called Across the Sea of Time, he plays another bland version of himself. The closest we get to a flash of stiletto is, perhaps, in Woody Allen’s Celebrity. Listen closely and you’ll hear that the mogul is planning to buy St Patrick’s Cathedral and knock it down.

If we can’t expect film-makers to humiliate Trump on purpose then we can, at least, enjoy an example of them doing so by accident. The most deliciously awful Trump performance is to be found in John Derek’s notorious Ghosts Can’t Do It from 1989. Bo Derek, the director’s wife, plays a widow who moves through world with – in the embarrassed form of Anthony Quinn – her husband’s unsettled ghost. The turn won Trump one of the few gongs he doesn’t boast about: that year’s Golden Raspberry for worst supporting actor. “From the look of this room it isn’t women’s work we’re doing today,” Derek says to a smirking Trump during a tense negotiation. “Be assured, Mrs Scott, that in this room there are knives sharp enough to cut you to the bone,” Trump says. “And hearts cold enough to eat yours as hors d’oeuvres.”

Trump is inexcusably ghastly in the role of himself, but you couldn’t say he isn’t making an effort. He deserves a less snarky award for the straight face he adopts at Derek’s rejoinder. “You’re too pretty to be bad,” she snaps back. They’re still cleaning the vomit from the few cinemas where Ghosts Don’t Do It actually played.

We can safely attest that Trump’s movie career is over (or, at least, transformed). It’s hard to play the amiable rogue when audiences have boasts concerning sexual assault playing continuously in their heads.

The remaining oeuvre does little to illuminate a figure whose grotesqueness seems to swell with each passing day. Ivana Trump, his first wife, did, however, get closer to the family strategy when playing her own celebrity cameo in The First Wives’ Club. “Don’t get mad. Get everything,” she snapped.

We must hope her old squeeze will fail to follow through on that advice.

Ah, 2008. At least back then you didn’t have to sit inside your negative equity property
4