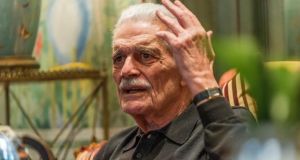 Omar Sharif, who made one of the greatest entrances in Hollywood history, has made his exit in his native Egypt at the age of 83.

The actor, who starred in hit films including Doctor Zhivago and Funny Girl, was recently diagnosed with Alzheimer’s disease.

His agent, Steve Kenis, said: “He suffered a heart attack this afternoon in a hospital in Cairo.”

He was an established star in Egyptian cinema when David Lean cast him in the 1962 epic Lawrence Of Arabia.

Cinema audiences watched entranced as he was first seen in the distance as a speck in the sweltering desert, before emerging as a black-clad figure on a camel who challenged the film’s hero, played by Peter O’Toole.

His performance made him an international star.

Other big roles followed with Sharif starring opposite Julie Christie and Tom Courtenay in Doctor Zhivago, where he played the title character in the romantic epic set in revolutionary Russia.

His appearance opposite Barbra Streisand, who is Jewish, was condemned in the Middle East but is now regarded as one of his finest roles.

He went on to star in dozens of films but his career never quite lived up to its early promise and his later fame rested on his ability with a pack of cards - he was a regular in casinos and was one of the world’s best bridge players.

But gambling took its toll on his career and, speaking in 2004, Sharif said he stopped making films when his own grandchildren started making fun of the low-rent movies he was appearing in.

He said: “I stopped making movies because, for the last 25 years, I’ve been making a lot of rubbish because I was in debt all the time.”