A contender in the main competition, ‘Dheepan’ nevertheless feels like a doodle compared to Audiard’s recent output 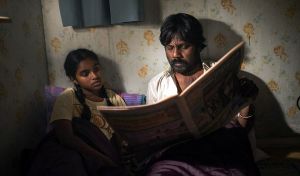 Dheepan (Antonythasan Jesuthasan) is a Tamil Tiger who flees the Sri Lankan civil war, taking with him two strangers – posing as his wife (Kalieaswari Srinivasan) and daughter (Claudine Vinasithamby) - hoping they will make it easier for him to claim asylum in Europe.

The makeshift family unit find work and accommodation in a violent Parisian banlieue, where their attempts at domesticity are disrupted by language difficulties, post-traumatic stress and gun-slinging hooligans.

Jacques Audiard’s new film was (apparently) inspired by Persian Letters, a 1721 proto-novel by Charles de Secondat, baron de Montesquieu, recounting the experiences of two Persian noblemen journeying through France. In this spirit, the viewer is never too sure about the politics underlying the gang warfare.

Unhappily, we’re not too sure about many things: it’s unclear what transpires when Dheepan visits his former commanding officer; it’s uncertain why a local kingpin (Vincent Rottiers) takes a shine to Dheepan’s wife, Yalini, and it’s equally baffling when, in the final act, the film suddenly turns into Rambo II.

Terrific central performances and fine camerawork from Éponine Momenceau add necessary grit to the coming shoot-‘em-up, yet Dheepan lacks the gravitas of Audiard’s best-loved works. For all the melodramatic eventfulness of A Prophet and Rust and Bone, those films were tonally consistent and epic in scope.

Dheepan may revisit the director’s pet preoccupations with masculinity and violence, but it fails to land any significant punches.

To be fair, it was always going to be hard to keep pace with Audiard’s recent run of movies. Comparatively, Dheepan feels like a doodle, though it remains a thoroughly engaging doodle.

Green Room is in the main competition for the Palme D’Or at Cannes 2014. For the latest Cannes coverage, click here