Even with a novice crew and amateur actors, this fiendishly clever debut takes the courtroom drama to new places 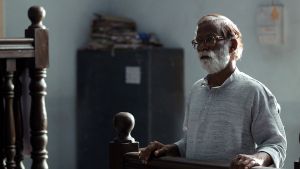 Your honour: Vira Sathidar in Court

Just when you imagined that the courtroom drama had no particular place left to go, along comes Chaitanya Tamhane’s fiendishly clever debut feature.

Narayan Kamble (Sathidar) is a 65-year-old social activist and singer who is part of a troupe that performs around Mumbai’s less salubrious neighbourhoods. When he is arrested and charged with inciting a sewage worker to kill himself – supposedly after listening to one of Kamble’s vaguely socially-minded songs – defender Vinay Vora (Gomber) takes on the patently ludicrous case.

But between corrupt police officials, a ridiculous tort handed down from the Victorian era, a stickler of a judge (Joshi), and a dogged public prosecutor Nutan (Geetanjali Kulkarni), the case is not an easy one.

Cinematographer Mrinal Desai maintains an appropriately static gaze and always lingers a beat longer than most cameras would dare, a strategy that proves revelatory in every possible sense. A superficially freewheeling plot jumps between the carefully realised principal characters: Nutan is a hardworking mum-of-two who takes her family to immigrant- bashing pantomimes; Vinay enjoys imported cheese and jazz between social causes; the seemingly patient judge’s capacity for kneejerk cruelty is revealed is a small, incredibly disturbing final gesture.

It took first-time director Chaitanya Tamhane three years to complete Court, a most deserving prize-winner at both Venice and Dublin last year. Remarkably, he did so using a first-time crew and non-professional actors, a gamble that has greatly aided the picture’s verisimilitude. Beneath the studied neo-realism, the careful humanism and the hustle-bustle of the plot, lies a barbed critique of injustice and a deeply troubling portrait of what passes for freedom of speech and artistic expression under Indian democracy.

Human rights soon look like Nutan’s cheeses: a luxury that only the privileged can afford.

Watching how this magnificent, frequently maddening drama coalesces into a powerful chronicle of gaping social inequalities and judicial inadequacies, it’s impossible not to think of the great Indian master Satyajit Ray. There can be no higher compliment.