Connie Nielsen on Sea Fever: ‘Right now the film has taken on a whole new depth’ 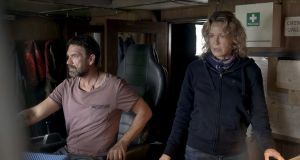 Twenty years ago, Connie Nielsen was taking direction from Ridley Scott at a partially reproduced Colosseum in Malta. Her turn as Lucilla – a buffer between Joaquin Phoenix’s mean Commodus and Russell Crowe’s Maximus – in the Academy Award winning Gladiator arrived on the back of a series of supporting roles in The Devil’s Advocate and Rushmore. She has subsequently worked with everyone from Robin Williams (One Hour Photo) to Samuel L Jackson (Basic). She has been directed by several of cinema’s most admired auteurs including Susanne Bier (Brothers), Olivier Assayas (Demonlover) and Lars von Trier (Nymphomaniac).

“Lars knows exactly what buttons to press,” she says of her fellow Dane. “And he really takes pleasure in pushing those buttons. He loves to ask people: what are you so afraid of? Where does that fear come from? What is it about this that triggers you? He has a deep understanding of social limitations and a wicked sense of humour. Some people think he’s a bigot but I know for a fact he’s not. He just has a terrible Danish sensibility. He’s a provocateur.”

Today, in common with almost everyone else, Nielsen is in lockdown in her California home.

“I have cleaned everything – and I mean everything – inside our house,” she says. “I’m trying to see a silver lining and I guess it’s that a baby could eat its dinner off my floor.”

It’s odd to consider Nielsen’s turn as a salty Irish captain in Neasa Hardiman’s debut feature, Sea Fever. The science fiction thriller follows the unfortunate crew of a west of Ireland trawler, marooned at sea, as they struggle against a lethal parasite in their water supply. The film’s themes of contagion and self-imposed quarantine could not be timelier.

“It does feel weird to talk about it,” says Nielsen. “I don’t want to be flippant about what’s going on. But here’s a movie that naturally speaks to it. It’s not exploitive in any way. It uses contagion as a way of talking about human beings. When we debuted in Toronto last year, there was a different emphasis on the film because the environment was in the news. And a lot of people interpreted the film as the environment hitting back, as nature saying stop: stop exploiting, stop interfering. And, to a large degree, I think that still stands. But right now the film has taken on a whole new depth.”

There are obvious comparisons to be made between Sea Fever and Alien, but a gender balanced and diverse ensemble – including Olwen Fouéré, Hermione Corfield, Ardalan Esmaili, and Elie Bouakaze – alters the genre DNA.

“That does change the film,” says Nielsen. “And the emphasis on psychology also. You feel it as an actor and a woman. The moment you start reading the script, you think: oh yes, that’s right, I’m human, I actually speak like that and I think like that. So there’s a reality and a truth that I can sink into when I see this movie. I feel recognised in the material. I feel seen.”

Nielsen felt a special affinity for the character as she, too, grew up in a fishing village – Elling in north Denmark. At 18, she moved to Paris and then to Rome and Milan. She remained in Italy for many years before landing a role in The Devil’s Advocate. She speaks eight languages: Danish, English, French, German, Italian, Norwegian, Swedish, and some Spanish. Her eldest son, the actor Sebastian Sartor, mostly speaks Italian at home. Her 13-year-old son, Bryce Thadeus Ulrich-Nielsen, is first generation Danish-American; dad is Metallica drummer Lars Ulrich.

Her career is similarly international. She shot Perfect Sense in Glasgow, Ali and Nino in Azerbaijan, and A Shine of Rainbows in Donegal. She used the same accent for Sea Fever.

“We hadn’t talked about the accents before,” she laughs. “I think they just thought I would be doing my own accent. But when I arrived, I said: no, no, no. Because I just love that accent. I love that Northern Irish sound.”

Sea Fever was shot in between Wonder Woman films. Nielsen will reprise her role as Queen Hippolyta in Wonder Woman 1984 in August (if cinemas have reopened.) Many box office analysts were surprised when 2017’s Wonder Woman scared up $821 million in worldwide ticket sales. Connie Nielsen was not.

“I have been saying this for my entire career,” she says. “There are more women than men. Of course, women want to see films by women. Of course, they want to see female action heroes. And then someone would point to two movies that didn’t do well. And you know what? Those films were not good. Or if they were good, they didn’t get the same budget for marketing or advertising.

“Films don’t hit their stride for a variety of reasons. But too often, when they did cast a woman as an action hero, the films were written by men and directed. They reflected a male sensibility. They had a fake toughness. The sexiness of Wonder Woman and the Amazons serves women; it doesn’t exploit them. There’s no duality of body and minds which is what happens under the male gaze. It’s looking to give to women, not take.”

Many times we tire of striving for equality because it’s just too much work. And that allows the status quo to maintain
an unequal access to power

The Me Too movement has changed the conversation around movie-making and has questioned the dominance of the male gaze, but there is, says Nielsen, a lot more work to be done.

“Me Too is what should have been all along,” she says. “There are moments in our culture when all of a sudden we wake up to the idea of equality. And those moments are rare. Many times we tire of striving for equality because it’s just too much work. And that allows the status quo to maintain an unequal access to power.

“I have always been a feminist. And when I started my career I was stunned by the fact that the women I was playing did not have stories. They didn’t exist in a real way. They didn’t speak in a real way. Again and again and again, I was the only woman on set. And that’s still going on. You still see movies where it’s seven guys and one girl and you just think: I am not watching that. I saw this western the other day that was made two years ago and I felt so bad for the girl. She was supposed to be the boss in the movie, and she was clearly beautiful and talented, and she was playing this long-suffering, crying person with extraordinary cleavage. The writers had no interest in the character.”

She has been proudly flagging rubbish writing and asking too many questions for more than two decades. Has it cost her work, I wonder?

“Oh my God; I have been the bane of so many people’s existence,” she laughs. “I haven’t heard if I’m rumoured to be difficult. I probably am. It always depends who’s telling this story. Too many times people just get labelled. I don’t think I’m being difficult by pointing out the things that have always worried me.

“I worried about the kind of storytelling that was going to cost us the progress that we made during the 70s and 80s. And we did lose a lot of that progress. And that also doesn’t allow for a really relaxed and creative experience. Because it feels like you’re tilting at windmills all the time. You’re trapped in some weird fantasy. I’ve been saying these things since my first movie.”

And what a movie that was. Par où t’es rentré ? On t’a pas vu sortir was one of two movies that Jerry Lewis made in the 1980s for an exclusively European release. It concerns a private detective and, well, couscous.

“My very first film,” laughs Nielsen. “I was 18; everything about it was surreal. I spoke French but I did not understand the humour. It went right over my head. I thought it was very old man humour. So I think I played it straight most of the time. I have the most extraordinary memories. I remember being on set with Jerry Lewis. And we had this scene and we were cooped up in a cage with a toothless lion. And the lion was so tired and old they couldn’t even make him look half alive. And in the middle of that – with the lion and the toothlessness – it was one of the saddest sights in the whole world, Jerry Lewis tells me two things.

“He tells me about his open heart surgery and that involved opening his shirt very far down to show me this enormous scar that ran from his throat. And then he talked about disliking the clothes of the movie so much that he was using his own clothes. And they looked so old to me. He was such a man of his time. We were in the 80s. But he still wanted to look like he was part of the rat pack.”

Sea Fever is available from on-demand services from April 24th