Based on the true story of an US TV news anchor’s on-air suicide, Antonio Campos’ compelling film teases out all the contradictions of Christine Chubbuck’s life

The official trailer for 'Christine', the macabre story around why reporter Christine Chubbuck killed herself live on air in 1974. Video: Curzon Artificial Eye 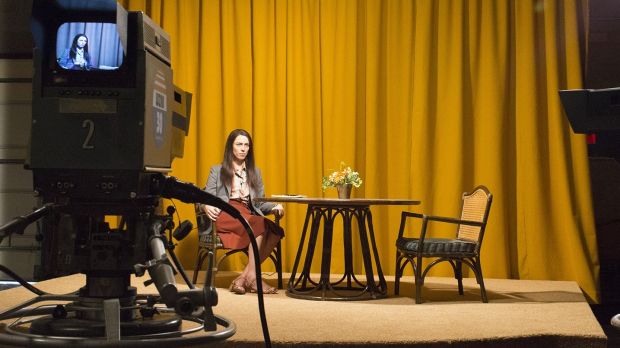 “In keeping with Channel 40’s policy of bringing you the latest in blood and guts, and in living colour, you are going to see another first: attempted suicide.”

These fateful words were spoken on July 15th, 1974, by Christine Chubbuck, a 29-year-old television anchor who shot herself in the head during her morning news show on a Floridian station.

This mostly forgotten incident was recently excavated for Robert Greene’s Kate Plays Christine, an experimental docu-drama that follows House of Cards star Kate Lyn Sheil as she researches the life of Chubbuck before staging her tragic death. That innovative film foregrounded the unknowability of Chubbuck’s motivations, an honourable, ethical presentation that made for frustrating viewing.

Antonio Campos, the director behind the tricksy Simon Killer, is equally careful about providing easy answers, but his much-admired three-act tragedy achieves complexity with far more dramatically satisfying results. Working from a carefully calibrated screenplay by Craig Shilowich, Campos and leading lady Rebecca Hall – in a career-best performance – tease out all the contradictions of Chubbuck’s life.

A community-minded reporter who stages puppet shows for intellectually disabled children, Chubbuck is increasingly dismayed by the “if it bleeds, it leads” sensationalism that has taken hold of her profession and workplace. The awful misogyny of 1970s office politics doesn’t help her state of mind.

One of many screaming matches with her boss, played by the incomparable Tracy Letts, ends with him hissing: “You’re a feminist. You think that the way to get ahead is by talking louder than the other guy.”

Her flat delivery might have been a hit were she a monotone patriarch, but, as a woman, it ensures she is passed over for a less talented “firecracker”.

There are problems at home with a mother who struggles to cope with her daughter’s depression. There are gynaecological problems, too. Hall’s depiction of depression allows for humour, moments of levity, and even giddy girlishness. It allows us to reach someone who, in the last weeks of her life, is already beyond reach, and to discuss the issues that affected her, even if she, sadly, never got that chance.

Together, director of photography Joe Anderson, designers Molly Bailey and Jess Royal and costumier Emma Potter fashion a world that is boxy and brown, and without recourse to the usual 1970s visual cliches. Campos, meanwhile, pulls off the ultimate balancing act, with a compelling drama that is simultaneously respectful and provocative.