As art director of MGM, the Dubliner designed that statuette and created the look of the American dream 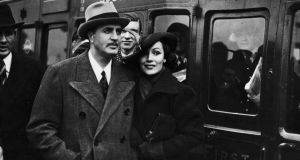 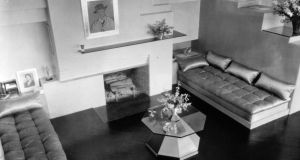 A room in the house outside Santa Barbara that was owned by Cedric Gibbons and Dolores del Río. Photograph: Hulton Archive/Getty Images

High up in the Santa Barbara mountains, with a commanding view of the Pacific Ocean, is the unobtrusive two-storey villa that once housed Ireland’s most prolific Oscar winner. No, not Daniel Day-Lewis, but Cedric Gibbons. This art deco house is the longest-standing physical legacy of the man; the house, of course, and one instantly recognisable, iconic statuette.

Gibbons was born in Dublin on March 23rd, 1893, and moved with his parents, Austin and Veronica, to New York City at the turn of the century. He trained as an architect, like his father, and later as an artist, but soon found that set design was his passion.

In 1915 he started working at the Edison Studios in New York and was later poached by Sam Goldwyn, becoming art director of Goldwyn Studios at the age of 25. He kept the post in 1924 – when Goldwyn Studios merged with Metro Pictures Corporation and Louis B Mayer Pictures – to become the head art director for what would become MGM.

Between 1924 and 1956, Gibbons oversaw art direction on almost every film for MGM. His role was often less hands-on than supervisory; Vincente Minnelli, whose 1951 film An American in Paris won an Oscar for Gibbons and a best director nomination for Minnelli, called him “the grand cardinal of the art department” and the department a “medieval fiefdom”.

Gibbons was exacting and meticulous, and his set designs cemented the look of the golden age of Hollywood. In his early years, he eliminated unrealistic painted backdrops in favour of real furnishing and settings. In the late 1920s, he introduced the visual vocabulary of the art deco movement to the American public. Gone were frilled curtains and chintzy interiors; in were venetian blinds, white walls and highly lit, three-dimensional scenery.

The art deco influence extended far past his film sets. As a founding member of the the Academy of Motion Picture Arts and Sciences in 1928, Gibbons was tasked with designing the Oscar statuette: he came up with a gold-plated knight clutching a crusader’s sword. Aside from a short period during the second World War when gold was replaced with plaster due to shortages, Gibbons’s design and composition has essentially remained the same for more than eight decades.

Gibbons himself was nominated for 39 Oscars and won 11. Despite all his talents there were, and still are, murmurs about his work. At retirement, he had 1,500 film credits to his name – it would be impossible for him to have single-handedly done them all. His contract stipulated he be named as the head of design on every MGM film and the bulk of his work may have been overseeing. His actual output has been estimated at about 150 or so films.

Gibbons was very stylish. He drove a Duesenberg and liked to wear a grey homburg and gloves. A picture of him at the second Academy Awards in 1930, where he won his first Oscar, shows a pencil-moustachioed man in an immaculate three-piece suit: cutaway tails, white waistcoat and a matching pocket square nonchalantly stuffed in an upper pocket.

In 1928, he met Mexican star Dolores del Río on the set of The Trail of ‘98. She was going through a messy divorce from Jaime del Río and extricating herself from her controlling manager and lover, Edwin Carewe. Gibbons bided his time, waiting until July 1930 to see her again. He asked his friends William Randolph Hearst and Marion Davies to introduce them at a garden party at Hearst’s palatial estate.

By the end of the month, they were engaged. The fast engagement was convenient: del Río had just been named in a divorce lawsuit. Nevertheless, a real sense of affection was palpable between Gibbons and his bride. The couple were married on August 6th, 1930.

The marriage was less than stellar. Del Río had a habit of forming relationships with detail-oriented, possessive men, and, although Gibbons was not using her star to further his own, his borderline obsessive nature may have been a strain. Perhaps apocryphally, he has been quoted as saying, “When I find things I like, I see no reason to change them. Except women.”

Although the couple had cultivated a unified image, holding dinner parties for film star friends at the home he built for her, the villa was also party to some interesting design quirks. According to an Architectural Digest article in 2008, then owner, producer Joe Roth said: “Legend has it that there was a trapdoor from the master bedroom closet that led to the closet in the downstairs bedroom.The story goes that Gibbons slept downstairs, del Río slept upstairs and that he would climb the ladder.”

The couple were divorced in 1941. By then, they had been living apart, and del Río was having an affair with Orson Welles. In 1943 Gibbons married 19-year-old actor Hazel Brooks, who remained his wife until his death in 1960.

Despite all this, Gibbons’s life was relatively untouched by scandal; no mean feat for a man who spent four decades at the top of his creative game. His work permeated the consciousness of a nation, and his legacy was solidified by making art deco the chosen interior of the American dream and the movies a place where people could go to escape harsher realities.

The house that Gibbons built doesn’t just sit in the Santa Barbara mountains; it can also be seen in thousands of gold-plated statuettes and countless reels of film.