Cassandro, The Exotico!: Handmade, heartfelt and against the grain 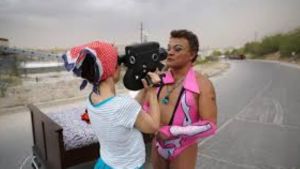 Most contemporary documentaries are glossy and as well staffed as a Marvel movie. They are sleekly staged, hagiographic and scripted like a narrative feature. In contrast, pitched somewhere between found home movie and Agnès Varda’s performance art movies, Marie Losier’s film is handmade, heartfelt and going entirely against the grain. She even opens with spluttering Skype call.

A one-woman crew, Losier travels alongside – and occasionally tends to – her lucha-libre subject as he tours Antwerp, Paris, and London. Saúl Armendáriz, known in the ring as Cassandro, was born and raised in El Paso. He mastered drug addiction – he has the Narcotics Anonymous chips to prove it – before he mastered wrestling.

Gay men, as Cassandro explains, have long featured in lucha libre in the role of “exótico,” but they were figures of fun until he became a title holder. And he did it with wearing full trains into battle – a tribute, he explains, to his idol Princess Diana.

As he goes back on the road, Cassandro’s body is a map of scars, surgeries and bitemarks. His teeth and hair have been knocked out and pulled out respectively. He has been hospitalised nine times for concussions. A montage of his X-rays reveals metal pins, cracks, and mush where lungs and ribs ought to be.

Struggling with a terrible leg injury and on the wrong side of 40, you don’t need medical training to realise that Cassandro should retire. He remains determined to go on. But for how long?

His physically painful journey is broken up by compellingly odd diversions, often of a spiritual variety. No headlining star has even blessed himself more often in any film, as he bounces between shamanic desert ceremonies, makeshift hotel room altars, and the lighting of a candle in a church.

An indomitable spirit, when he breaks down on a Skype call to the director, she tells him: “I wish I could give you a kiss.” The film, which premiered at Directors Fortnight in Cannes, feels like that wished-for embrace.

On MUBI from May 18th

The movie quiz: Who has never had a film banned in Ireland?
7