Casey Affleck deserves the Oscar, not to be hounded over sex allegations

Does one have to be without sin, stain or misdemeanour to earn an Oscar?

Casey Affleck won the best actor Oscar for his role as a grief-stricken father in, "Manchester by the Sea." It was the first Oscar for Affleck, 41, the younger brother of "Argo" director and actor Ben Affleck. Video: CLIP COURTESY A.M.P.A.S. 2017 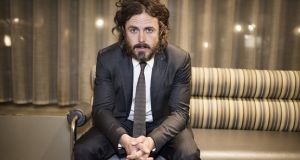 Oscar weekend and here we go again: who will win versus who should win. Last year’s Academy Awards were dominated by the lack of recognition for actors of colour – this year there’s significant representation for the major awards.

Another, if more pressing, topic was the threat that had he not won for a blistering tour de force in The Revenant, protest vigils were planned around the world, even in Dublin’s O’Connell Street.

One has to wonder about the fuss the Oscars generate, considering that hype (see La La Land – yawn), race, gender, topicality, politics and the old “it’s their time” often appear to have more of a say in the outcome, than performance.

This time the destination of the best actor is again surrounded in soapbox discussion but of a far darker variety.

Casey Affleck, a 2007 nominee for best supporting actor and initially tipped as the obvious winner for his masterful portrayal of a man tormented by grief and guilt in Manchester by the Sea, has faced consistent attacks about his being an unworthy nominee.

Since when was an acting award decided on good behaviour?

Why? Nothing to do with his acting but because of sexual harassment allegations made against him by two female colleagues during the making of the spoof documentary I’m Still Here, which were settled out of court six and a half years ago – yet are now clouding awards coverage and may well have ended his chances.

Since when was an acting award decided on good behaviour?

Affleck, now 41, has won many prizes during his career. For this role alone, he has to date been nominated for more than 50 awards, including the Oscar; he has won 47 best actor prizes, including the high-profile Golden Globes, Baftas, Gothams, Critic’s Choice and the New York Film Critics awards.

Most significantly in the circumstances, the Alliance of Women Film Journalists and the Women Film Critics Circle named him best actor.

This suggests that there are many film forums, including all-female panels, more concerned with assessing performances on film than the personal conduct in private life based on allegations. Award juries are entrusted with judging work, not the artists.

As a woman and the mother of a daughter, I resent being asked why I went to see “a movie with a sex offender in it”. I don’t condone sexual harassment or bad behaviour but I am weary and embarrassed in general with the way many shout “abuse” nowadays; and am particularly wary about the witch-hunt that has surrounded this actor in recent months. Note “recent months”, in other words once his obvious claim for the Oscar emerged.

It is a sorry indictment if it is seen as correct to applaud Brie Larson for being so curt when presenting Affleck with his Golden Globe. Similarly, it was disappointing to see an ungracious Penelope Cruz hand over Affleck’s Bafta as if it were a parking ticket.

Affleck did not hit anyone, he did not physically hurt anyone. He is neither a rapist nor a child abuser

These actors appeared to obviously disapprove of Affleck’s alleged behaviour. Why did they not decline to present the award, when it was certain he was going to win. Larson as a supporter of abuse victims could have easily made her case.

But Affleck did not hit anyone, he did not physically hurt anyone. He is neither a rapist nor a child abuser. Larson need not worry about how to dismiss Affleck on Sunday night at the Oscars; he is unlikely to be receiving one. Such a shame.

“Does This Man Deserve an Oscar” asked a headline in the Telegraph on the morning following his Bafta win, before proceeding to analyse the sexual harassment allegations.

Affleck does merit this year’s Oscar for best actor. His outstanding performance in Kenneth Lonergan’s Manchester by the Sea will be remembered. It is restrained, impressive and convincing; he engages the emotions as well as the mind in a powerful screenplay by Lonergan, which is neither sentimental nor melodramatic –and decidedly un-Hollywood.

Why didn’t stories about the allegations dominate coverage of his roles in Triple 9 or The Finest Hours, both of which were released last year? Does bad behaviour only merit scrutiny when an Oscar is beckoning? Does one have to be without sin, stain or misdemeanour to earn an Oscar?

Affleck was critically acclaimed for his work in Ain’t Them Bodies Saints, as well as for Out of the Furnace, both released in 2013. Interest in the sexual harassment allegations had waned, no one had trouble casting Affleck.

Of the field of five up for the best actor Oscar, Affleck gives the most compelling performance. His main rival, Denzel Washington, directing Fences, is stagey and forced, reprising his Tony award-winning role and is in need of a director in a predictable film still obviously a polemical play, part of a theatrical cycle about the experience of Black America.

It is ironic that Affleck, who knew both of his accusers – one of them had worked with his brother Ben and Matt Damon on the Oscar-winning Good Will Hunting in 1997 – has seen the story resurface and it will continue to haunt him, at a time when an individual with a far more extensive portfolio of sexual harassment and charges of verbal abuse of women along with just about everyone else, is currently US president.

Affleck wrote and directed the spoof documentary I’m Still Here, in which actor Joaquim Phoenix claims to be giving up acting in favour of hip hop. Intended as a satire about fame and celebrity, it was revealed by Affleck as a hoax and was dismissed as a clever disaster.

Lurking in its background are the harassment incidents.

Both of Affleck’s accusers, producer Amanda White, who had worked on Good Will Hunting, and Magdalena Gorka, director of photography, had complained about the behaviour on set and the prevailing male sexual innuendo.

Gorka alleged that Affleck had got into the bed in which she was sleeping in a New York apartment rented by Affleck and Phoenix during the making of the film.

She stated that Affleck’s “ breath reeked of alcohol”, that he had rubbed her back, hugged her and kissed her having got into the bed in which she was sleeping. He was dressed in his T-shirt and underpants. It is all very squalid, even to read about.

There are several levels of annoying and irritating harassment before one is dealing with serious sexual assault, domestic violence and rape.

Affleck is not a sex offender and does not feature on the US sex offenders register yet he is now being mentioned in the same breath as director Roman Polanski, who pleaded guilty in 1977 to drugging and raping a 13-year-old girl when he was 43. Polanski still faces imprisonment should he attempt to re-enter the US.

In 2002 he won the Oscar for The Pianist; Harrison Ford collected it on his behalf. Apparently there is a statute of limitations, even on Oscars.

Affleck has also been compared with actor-director Nate Parker, who was accused, yet acquitted in court of rape in 1999. The victim subsequently died of an overdose 13 years later. Parker expressed his sympathy, yet reiterated his innocence – but his Oscars hopes for his ambitious remake of The Birth of a Nation (which included a vicious rape scene) were quashed.

The notion of the Academy Awards, decided by a community involved in a tough, unforgiving industry, as a benchmark for human behaviour is hard to swallow. Affleck’s big mistake will continue to track him, but then so will his wonderful performance and perhaps the Oscar that got away.