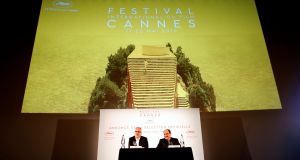 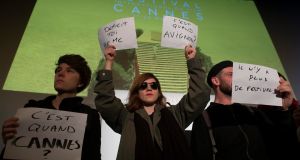 Entertainment industry workers stage a protest against labour reforms before the official presentation of the film selection in competition at the upcoming 69th Cannes Film Festival, during a press conference in Paris, France, April 14th, 2016. Signs , from left, read: “When is Cannes?”, “Deficit Yourself”, “When is Avignon [festival]?” and “There is no more festival”. Photograph: Ian Langsdon/EPA

“We hope to show the state of cinema in Spring 2016,” Thierry Frémaux, director of the Cannes Film Festival, told an expectant audience in Paris this morning.

The initial diagnosis is hopeful. The 20 films that Frémaux announced for the official competition include a tasty smattering of work by established masters.

Pedro Almodóvar looks like the ante-post favourite for the Palme d’Or, the festival’s biggest prize, with his family saga Julieta. Ken Loach, who has played in the competition more often than any other film-maker, returns with I, Daniel Blake, a characteristic slice of social-realism. Jean-Pierre and Luc Dardennes, among a handful of film-makers to have won two Palmes d’Or, will offer lucky visitors the intriguing The Unknown Girl.

“The idea that we always have the same people is wrong,” Frémaux said.

Those familiar names are there, but the 2016 selection does bristle with quite a few younger and fresher faces.

Xavier Dolan, the 27-year-old Québécois master, makes his second appearance in the main competition with a star-studded drama entitled It’s Only the End of the World.

Maren Ede, a German filmmaker who has spent most of the past decade as a producer, offers up a surprise entry with Toni Erdmann.

“We are happy to welcome back Germany, ” Frémaux said. “I will expect a phone call from Wim Wenders or Werner Herzog now. Ha ha!”

Ede is one of three female film-makers competing for the Palme d’Or. She is joined by Andrea Arnold - the Kentish director of Red Road and Fish Tank - whose American Honey sends Shia LaBeouf rattling across the United States, and by Nicole Garcia, whose Mal de Pierres stars Marion Cotillard in an adaption of a Milena Agus novel.

Three out of 20 may not sound like a great hit rate, but it is only four years since a competition was announced with no female directors at all. Arnold, a Cannes favourite, looks likely to compete for prizes.

Steven Spielberg’s The BFG, an adaptation of the beloved Roald Dahl story, will play out of competition.

Jim Jarmusch’s Gimme Danger – a documentary on Iggy Pop and the Stooges – will get a much-anticipated midnight screening. Jarmusch also has a drama, Paterson, in competition.

Shaking themselves back to sobriety after that heavenly awards season, domestic observers will regret the lack of Irish films playing in competition or in the second tier Un Certain Regard section.

Jim Sheridan’s The Secret Scripture was seen as a possibility, but sounds more like the sort of Oscar-friendly release that graces the Toronto Film Festival in the autumn.

Ruth Negga, the impossibly gifted Irish actor will, however, be walking the red carpet before the competition screening of Jeff Nichols’s Loving. Negga plays Mildred Loving, the American woman arrested for marrying a white man in Virginia during the 1950s.

Everything about that last sentence reeks of prizes.