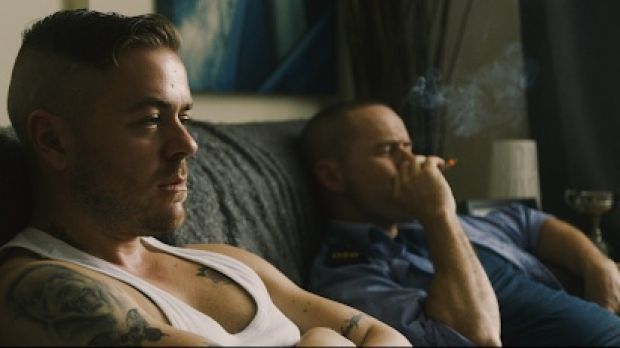 Over the past decade or so a school of Dublin noir has edged its way into the nation’s consciousness. The films tend to take place on the move – catapulting between drug den and holding cell. John Connors appears in a few of them. Tunes from the always-welcome Damien Dempsey often underscore the battered action.

Broken Law, a labour of love from debut director Paddy Slattery, satisfies the three criteria above. We begin with Joe Connolly (Graham Earley) getting out of prison and we end with much waving of firearms. Connors, never short on burly charisma, turns up as an untrustworthy sidekick who won’t let the protagonist live a straight life. In case we miss the Dempsey number, two key characters discuss the singer’s merits before an urban lament echoes across the rooftops. Footnotes to future theses on millennial noir write themselves.

Slattery’s film is, however, not cut from quite the same cloth as Mark O’Connor’s popular Cardboard Gangsters (plenty of Connors and Dempsey there as well). Slattery, who was raised in far-away Offaly, says the script was trimmed down from a larger project that interlocked stories in the manner of Paul Thomas Anderson’s Magnolia. That makes sense. Often tending more towards kitchen-sink soap than full-on thriller, the narrative is economic to the point of stinginess. A few cogs seems to be missing from the machine.

Shortly after walking free from prison, Joe gets talked into one more heist by the irresponsible Wallace (Connors). While those plans are being hastily thrown together, his brother Dave (Tristan Heanue) is getting on with the business of being a largely decent police officer.

Irish cinema has traditionally been cynical about An Garda Síochána and, here again, we get to see the messy underbelly of law enforcement. In one of the most prescient moments of the summer, a senior officer notes that: “We’re not the most popular professionals in the world right now.”

Were the film shot this year rather than in earlier, less socially distanced times one might read that as an on-the-nose reference to Black Lives Matter. But Broken Law also allows for decency. Early on we find Dave stopping an archetypal Karen – did Slattery have a crystal ball? – for speeding and rejecting her clumsily offered bribe.

Can we spoil the bank robbery? Suffice to say it hangs around a coincidence so absurd it may have caused the author of a Victorian sensation novel to think twice. This is not the only bit of clunky storytelling in a script that would have profited from a few more tweaks. (Why do so many Irish films insist on conveying story points through conveniently glanced news bulletins?)

For all that, Broken Law gets by on strongly rendered atmosphere and performances that mesh together with admirable smoothness. Graham Earley, another Cardboard Gangsters alumnus, has an engagingly relaxed way with a profane remark. Heanue convincingly gets across the warring impulses within his harried psyche.

Ally Ní Chiaráin, unavoidable recently in The Winter Lake and Dating Amber, is particularly strong as the boys’ robust, indomitable mother. Gemma-Leah Devereux does Trojan work as the bank employee who gets (somewhat implausibly) drawn into the family’s traumas. The mobile camera and tasty editing go some way towards distracting from the narrative imperfections

Working on a small budget at a furious pace, Slattery is to be commended for serving a digestible slice of Dublin life that will win him fans and will open doors to new possibilities. One is left yearning for the iris to open further and let in the wider world that surrounds these characters and their concerns. We may yet get that opportunity.

On limited release from August 31st