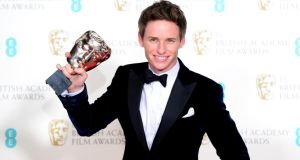 Eddie Redmayne, viewed as being in a close battle with Michael Keaton, star of Birdman, took the best actor prize for his performance as Prof Stephen Hawking in ‘The Theory of Everything’. Photograph: Dominic Lipinski/PA Wire

A fascinating weekend in the long war that is awards season ended with Richard Linklater’s Boyhood – which follows an adolescent through 12 years of life – taking the best film prize at the British Academy of Film and Television Awards (Baftas) in the Royal Opera House in London on Sunday night. Linklater won best director.

Boyhood had been runaway favourite for the best film Oscar since late summer, but, when it lost to Alejandro González Iñárritu’s Birdman at the Directors Guild of America on Saturday night, most bookies moved the Iñárritu film into poll position. Boyhood and Birdman now seem tied in the race for the biggest prize.

Wes Anderson’s Grand Budapest Hotel topped the Bafta charts with five wins, including those for score and production design. Eddie Redmayne, viewed as being in a close battle with Michael Keaton, star of Birdman, took the best actor prize for his performance as Prof Stephen Hawking in The Theory of Everything.

More than a few odds-on favourites romped past the finishing line. Julianne Moore, currently at a horrible 1/50 with bookies for the Oscar, duly won best actress for playing an academic with Alzheimer’s Disease in Still Alice.

JK Simmons, who plays a sadistic music teacher in Whiplash, won best supporting actor and thanked his wife for “many gifts, including our two above-average children”. Patricia Arquette, who plays the protagonist’s courageous mother in Boyhood, also came in at unbackable odds.

There was good news for the domestic industry with Michael Lennox’s charming Boogaloo and Graham, set in 1970s Belfast, winning best live action short. Mr Lennox’s film is nominated in the same category at the Oscars.

Until 2002, the Baftas took place after the Oscars. Since moving to their current spot, the awards have become a reliable pointer to the Academy Awards.

This year the fashion chatter was all about 1970s plunging necklines. Julianne Moore tried the look in scarlet. Reese Witherspoon did her plunging in ecclesiastic purple.

In two weeks’ time, the endless awards season will grind to a halt when the Oscars are handed out in Los Angeles.