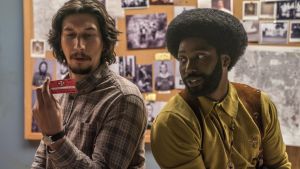 Adam Driver and John David Washington create a pairing – the former laconic; the later bemused – that cries out for further exploitation

Spike Lee has been getting in trouble throughout his career. He can handle it. Veteran Lee watchers may, however, be surprised by the precise colour of trouble he’s encountered with his latest incendiary entertainment.

Even the detractors admit that BlacKkKlansman is one of Spike’s most enjoyable films. The people at Cannes liked it enough to award it the Grand Prix. Coming off as a spicy mix of 1970s cop show, Blaxsploitation thriller, Civil Rights jeremiad and, in its closing moments, didactic documentary, the picture circles around the true story of a black cop who, in 1979, infiltrated and frustrated the Ku Klux Klan.

With one swift movement, the sharp, hilarious John David Washington, son of Denzel, shakes off his family history and carves out a place just for himself. The collision of styles is exhilarating. Terence Blanchard’s soundtrack is a blast. What’s not to like?

In recent weeks, commentators such as Boots Riley, director of the indie breakout Sorry to Bother You, have suggested that BlacKkKlansman plays too loosely with the truth. It makes cops the heroes in the era of Black Lives Matter. Maybe, it’s just a little too entertaining. This stuff isn’t supposed to be fun. Right?

Nobody who has seen a film before will – while speeding around the dives and chicanes of this often-zany movie – be in any doubt that the facts have been vigorously manipulated. Jordan Peele is among the producers and, like that film-maker’s Get Out, BlacKkKlansman makes its points largely (though not entirely) through the language of mainstream genres.

Detective Ron Stallworth’s story is no more than a starting point. Yes, there is some compromise in the film’s generous treatment of the Colorado Springs Police Department – only one other cop is vigorously, explicitly racist – but that easing off allows for a uniquely lively tone.

If you want rage, that’s here too. Indulging himself to a forgivable degree, Lee includes a powerful speech by the legendary activist Kwame Ture. Played well by Corey Hawkins, the former Stokely Carmichael lays down uncompromising truths at impressive length. Later on, the inestimable Harry Belafonte gets to expound further on the black experience.

There’s more. Lee exercises his playful instincts in an opening that takes us from clips of Gone With the Wind to an absurd explanation of “white superiority” from a pompous expert in a white coat. He ends with raw, furious footage of the white supremacist rally at Charlottesville one year ago. Lee has done more than enough contextualisation to allow himself a degree of relaxation in the core story.

The plot begins with Stallworth securing a job as the first black detective in the Colorado Springs police department. He suffers some patronising comments and, while working in the records room, gets abused by an archetypal redneck cop. Eventually he wangles a job in the undercover division and – as the only possible candidate for the job – is sent to observe Kwame Ture. There he hooks up with radical student leader Patrice Dumas (Laura Harrier is strong in an underwritten role) and gets just a degree of politicisation.

The Klan operation starts almost as a gag. One day, spying an ad in the paper, Stallworth phones up the organisation’s office and, adopting a less extreme version of the “white voice” that Richard Pryor used to enjoy, trades a few racist epithets with Grand Wizard David Duke (nicely odious Topher Grace). Obviously, he can’t infiltrate the organisation himself. So, the helpful Flip Zimmerman (Adam Driver) conceals his Judaism behind Ron’s name and steps up to attend the meetings.

What follows is lively, funny, agitated, hip and dynamic. Washington and Driver create a pairing – the former laconic; the later bemused – that cries out for further exploitation. The picture also manages something unexpected from such a politically charged project: warmth. The semi-factual stuff could almost be read optimistically.

Then reality kicks back in with a loud Trump.