Banksy Most Wanted: An attempt to unmask the furtive street artist 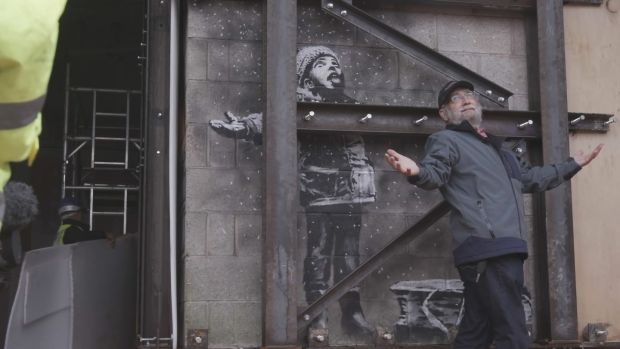 “Me being a journalism student, me being an idiot,” recalls former blogger Craig Williams, “I thought I’d go after the biggest story in the world. Not like ‘Who killed JFK?’ but something everybody can connect to. Something everybody is interested in: Who is Banksy?”

He’s not wrong. In the era of Google and cameras mounted on every major boulevard, Banksy remains anachronistically anonymous.

Or does he? Or she? This French-made documentary, though not nearly as much
fun as Banksy’s own Oscar- nominated doc Exit Through the Gift Shop, presents a decent potted history of Bristol’s (?) most famous export since Cary Grant. Various art correspondents and dealers pop up to discuss Banksy’s cultural significance while a number of investigators put forward their theories.

Craig Williams traces Massive Attack’s tour across the US and finds enough correlation to suggest that band’s Robert Del Naja. Metro reporter Martine Berg Olsen – using a due diligence expert as a source – alights on Gorillaz co-founder Jamie Hewlett. Claudia Joseph from the Mail on Sunday tracks a photograph taken in Jamaica back to Robin Gunningham, a former student at Bristol Cathedral School, which, as noted by an incredulous TV reporter, “is hardly the background of someone who made his name being hip and street”.

A criminologist in Texas, more accustomed to hunting serial killers through geographical profiling, backs the Gunningham theory. The Daily Beast suggests that four people are Banksy; the Guardian suggests that Banksy is a woman. Banksy’s former agent Steve Lazarides laughs at every suggestion. Meanwhile, there’s the age- old battle of art versus commerce playing out in the background.

With Banksy, it’s complicated. Robin Barton, a rich collector who buys up the walls that Banksy has sprayed, provides an important counterweight to a local Bristol boxing club that sells a door emblazoned with the artist’s now-famous Mobile Lovers mural. The Broad Plain Boys’ Club sold the piece, with Banksy’s blessing, to a private collector for €469,667.08.

Available to stream from March 19th