Commentators, fishermen, politicians and scientists collectively scratch their heads over Ireland’s disregard for its own waters 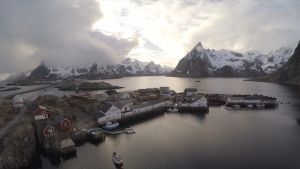 In 2010 the award-winning documentary The Pipe explored the stand-off between the people of Rossport and an unholy alliance comprising Shell Oil and the Irish State. With Atlantic, the activist and film-maker Risteard O’Domhnaill expands his fight back against big oil as commentators, fishermen, politicians and scientists come together to collectively scratch their heads over Ireland’s ongoing disregard for its own waters.

Perhaps ironically, this is a big trawl: between foreign super-trawlers hoovering up fish, former minister Ray Burke’s scandalous removal of state participation in oil companies in Ireland, and record numbers of seismic “sound-blasting” vessels scanning (and potentially damaging) the Irish seabed, Atlantic forms a damning chronicle of political, economic and environmental mismanagement. Alternative suggestions and approaches from Newfoundland and Norway ensure that the film, as it journeys from Arranmore to the Arctic, is a blueprint as well as a protest. Entertaining, informative and essential.

The misunderstood, useless and brilliant artists of the Irish diaspora
9