A Spell to Ward off the Darkness review: a too-dreamy search for the spiritual 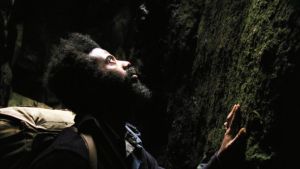 Film Title: A Spell to Ward Off Darkness

In theory, the film forms an “inquiry into the possibilities of a spiritual existence within an increasingly secular western culture”. In practice, three very disparate films emerge, linked only by the presence of Lowe.

There are, certainly, some interesting connections to be made between natural rhythms and the stonier end of the metal continuum. There is also an interesting Venn diagram to be drawn, depicting lesser-spotted subcultures, using the film’s cast as a model.

The idea of searching for magic in the margins of reality, however unscientific, ought to provide enough of a framework to support an experimental documentary.

Sadly, it doesn’t. This muddled curio doesn’t coalesce into anything, even by its own dreamy, associational terms. None of the individual segments feels like it belongs near any of the other segments. There’s no flow, no internal logic.

We’re left watching a film at war with itself. What kind of viewer will enjoy its hippie-friendly overture, the Thoreau section and then an hour of Lichens on stage? A very schizoid one, indeed.

Robert AA Lowe makes for an enigmatic talisman. But it would require a properly powerful incantation for Spell to translate into magic.