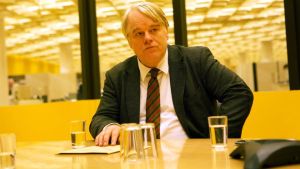 Film Title: A MOST WANTED MAN

Philip Seymour Hoffman will return for extended cameos in the last two Hunger Games films, but his lead turn in Anton Corbijn’s take on a 2008 John Le Carré novel stands as his final significant performance. It is a poignant pleasure to relate that he leaves us at the top of his game.

Of course, Hoffman has always been a master at playing flattened, disappointed anemones who know more than the sleek fish circling above. Le Carré’s novels abound with such creatures. Günther Bachmann, a German intelligence operative, is a good bit younger than George Smiley in the Karla trilogy, but he has the same fastidious bent and the same desire to do the best in impossible circumstances.

The world Bachmann inhabits is even more morally ambiguous than that of the Cold War. Operating in Hamburg, the city that germinated the 9/11 plot, he has responsibility for monitoring the various refugees from Middle-Eastern conflicts who arrive – hopefully, innocently or menacingly – into that hub.

Awful balancing acts must be embarked upon. On the one hand, Bachmann has to entertain the possibility of another terrorist atrocity. On the other, he has to restrain overly enthusiastic Americans eager to impose rendition on every passing foreigner. “Control always said that good intelligence work rests on a kind of gentleness,” Smiley observed in Tinker Tailor Soldier Spy. Bachmann must do terrible things, but he manages to live by that dictum.

This is a terrific portrayal of a good man adrift in an environment where it is impossible to act well at all times. Corbijn makes a fully fleshed-out enigma of the fag-smoking, booze-swigging intelligence operative. A descendent of Graham Greene’s whiskey priests, Bachmann is devoted to making some small sense of awful chaos.

Unfortunately, as is the case with many of Le Carré’s post-Cold War novels, the plot loses some direction as it settles into a dull fug in its middle act. A Most Wanted Man concerns a Chechen refugee (Grigoriy Dobrygin) who arrives in Hamburg with a mission to make contact with a shady banker (Willem Dafoe).

The Chechin’s legal position unsure, he soon connects with a liberal lawyer specialising in immigration (Rachel McAdams). Meanwhile, a CIA agent (Robin Wright) circles, ruthlessly eager to close in on a man who may or may not have jihad on his mind. Much of the plot deals with the labyrinthine processes that define the financing of contemporary terrorism.

This is one of those troubling films that only really makes sense of itself in the final 10 minutes. Viewers may find themselves frustrated with the characters’ decisions and bemused by the obscurity of the plot. Forward momentum is sometimes in short supply.

Happily, Corbijn, who has shown his taste for icy distance in Control and The American, makes the best use of Hamburg locations since Wim Wenders’s The American Friend back in 1977. The sense of endless bustle and obscure corruption is layered on as Benoit Delhomme’s camera soaks up the fetid ambience. Readers who remember Corbijn’s NME photography in the early 1980s will be delighted to hear a brief snatch of Der Mussolini by Deutsch Amerikanische Freundschaft as we whistle through a seedy bar.

There is, however, little doubt that A Most Wanted Man is Hoffman’s film. He doesn’t just dominate the picture; he wears it like a scruffy but well-fitted suit. It’s an honourable last bow.