A Girl at My Door review: Secrets and lies and a tangle of gender politics 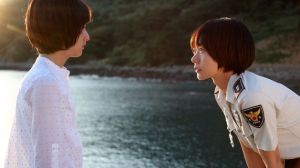 Film Title: A Girl at my Door

Bae Doona plays Young-nam, a cop who is transferred from the police academy in Seoul to take change of a police sub-station in a small coastal village. We soon realise that this demotion has come about due to her sexual orientation; homophobia, alas, isn’t the only prejudice she faces. Not long after her arrival, Young-nam encounters Sun Do-hee, a 14-year-old who is violently bullied by both classmates and family. Unhappily, the locals are not prepared to take on the girl’s drunken abusive father, as the local economy is entirely dependent upon his oyster farm.

Young-nam is not prepared to stand idly by, but her relationship with the troubled titular teen soon becomes increasingly, well, stalker-ish. In recent years, Bae Doona has played Grace Kelly to the Wachowski’s Hitchcock. But while the film-making siblings’ repeated casting of the artist in Cloud Atlas, Jupiter Ascending, and the TV series Sense8, may have attracted global attention, she has not yet been given an Anglophone role to properly knock your socks off.

Happily, The Girl at My Door gives the divine Ms Bae an opportunity to flex all of her acting muscles, albeit with small, delicate motions. Marvel at the way she slumps over the soju she decants into water bottles. Gaze at her not-entirely convincing deportment as she rocks up to her office.

Her accomplished turn is matched by July Jung’s clever nuanced drama, which shares DNA with Boon Joon-Ho’s police procedural, Memories of Murder. Here, however, the secrets and lies are doubly complicated by a tangle of gender politics.

Kim Hyun-seok’s deceptively sunny cinematography adds to the notion that nothing is quite as it seems but that still won’t prepare you for the denouement.