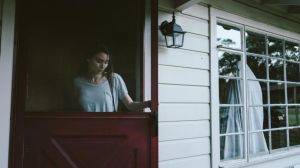 David Lowery is not afraid to take risks with his audience. Some ways into his playful reflection on mutability (beware, A Ghost Story is not a horror film) a supernatural force disturbs the books on the unnamed heroine’s shelf. We just know there will be no John Grishams or Dan Browns among them. Sure enough, she is forced to gather up a stray Nietzsche here and a scattered Woolf there. Rooney Mara and Casey Affleck play the sorts of people who have those sorts of books.

Much later, the film’s stubborn phantom lurks unseen at a party attended by people with beards. No less an idol than Will Oldham turns up to drone about humanity’s inability to leave any permanent mark on the expanding universe. If you wanted to dislike A Ghost Story – and many will – you good describe it as The Haunted Hipsters.

That would be a mistake. Coming off the back of the wonderful Pete’s Dragon, Lowery has taken a slimmed budget and allowed himself some creative indulgence. But the film feels sincere in its emotions. There is enough undisguised humour elsewhere for us to conclude that he doesn’t mind if we laugh at Oldham’s pomposity. There is nothing funny about his depiction of the way grief numbs the psyche.

The picture begins with Mara and Affleck living a largely happy life (it’s hard to tell with such cloudy actors) in an isolated one-storey home. Sometime later, with jarring suddenness, we cut to a shot of Affleck’s car crashed outside the house. He is dead. We move to the morgue where, after lying still for a spell, his body hinges up, leaves the table and wanders back to his grieving partner. For the rest of the film, Affleck remains shrouded beneath the mortuary sheet. He is, in other words, dressed like the evil fairground owner who evades detection until Scooby Doo arrives.

The joke recedes as the spirit proves his heroic tenaciousness. He throws a fit when Mara finds another man. He causes havoc for the family that moves in after she leaves. We learn that he was there when the pioneers made homesteads in the unmapped frontier. He will be there when the house is long demolished and mighty skyscrapers take its place.

Few small “personal projects” have felt quite so epic. But what sticks in the mind most are the smaller explorations of human frailty. A Ghost Story is already notorious for a sequence in which Rooney Mara plonks herself down and, with an aggression few actors bring to swordfights, eats her way through the greater part of an enormous fruit pie. Reports that the entire desert is consumed have been exaggerated, but the sequence does go on for a good five minutes.

The narrative purpose is clear: trauma often encourages binge-eating. But the scene also works as a class of stunt film-making. As with the extended pseudo-take in this week’s very different Atomic Blonde, the self-consciousness is part of the fun. You’re allowed to admire the act itself.

Such gimmicks do not distract from the film’s sentimental energy. Shot in a narrow ratio with rounded corners that suggest old photographs from a lost album, A Ghost Story swells with meditations on the unkindness of time: how we remember and, worse, how we forget. Mara is ideally suited to this class of sat-upon misery. Affleck almost certainly is too – although I can’t pretend I’d be astonished if it was revealed that someone else was under the sheet.

We end up with a film that, for all its playfulness, connects plainly with the emotions. It’s a little as if Apichatpong Weerasethakul, after Uncle Boonmee Who Can Recall His Past Lives, moved on to a remake of The Ghost and Mrs Muir. Who wouldn’t want to see that?